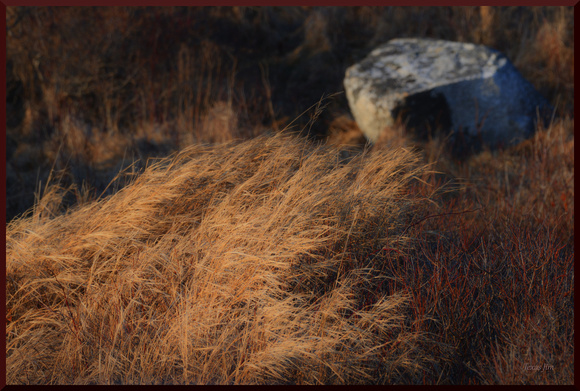 The Settlement
"Let's have some fun with words," said Noah.
He was walking with his mother, Delilah, his aunt Minnie, and his mongrel companion Sir Barksalot. They often went out together now that Big Bertha and Little Mac, the matriarch and patriarch of their household, were gone. It was nevertheless as if those two stalwart souls were still with them when they went together, as if each held puzzle pieces that could make a whole again.
"It's getting late," said Delilah. "It gets late so early these days. We should go home so I can start dinner."
"I'm with Noah," said Minnie. "Let's have us some fun. Home is only a minute away. We can have leftovers. There's still half a pot of that stew left from Thursday. And I love being out while the sun sets. I like to watch the colours softening. It helps settle my heart. Look at that patch of tall grass. Isn't it just calling out?"
The ocean breeze was bending the long shoreline grass and the lateral light giving back the deeper hues the day had drained away. The trio of humans all paused to observe. Sir Barksalot however went racing away from the path to chase a young seagull that had dared to remain perched on a nearby rock.
"Anyway, Mama, you've already started," said Noah.
"How did I do that?"
"Oh, he would have loved this," said the boy.
"Now you're really confusing me," Delilah said. "Who would have loved what?"
"Daddy Mac. We used to play this way. I can just hear him saying, 'How can it get late when it's early?' And then he would get that big smile on his face and say, 'Just goes to show that late and early, they're only ideas. They depend on each other, so neither one really ex...ex...exits."
"Exists, I think you mean," said aunt Minnie.
Noah nodded in agreement. "There's some things won't come the right way from my mouth. But anyway, that's the idea. And Aunt Minnie, what you said, we can play with that too. You said the colours of sunset help settle your heart. And Daddy Mac used to say that it's all about settling. He said that all a person had to do was settle and they would see things clearly and be happy. Like after you throw a rock in a pond and the ripples die out and the water gets like a mirror again. So since we're here getting settled, then this spot is our settlement, and we can stay here as long as we like, because now this is home."
Delilah sighed. "Yes, that's just about what Daddy Mac would say. And you're as like him as two peas in a pod. And you know what Ma Bertie would say? She'd say you need to get out and play with other children more often, so you don't wear out your brains too soon."
"Yes," Noah agreed. "And that's what she would say."
He took his mother's hand on the one side and Aunt Minnie's on the other and they stood contemplating the grass in the wind and its colours that called out and then cried out, and then Barkie came running back barking and the seance was ended and they about-faced on the path and headed home through the village where the smells of woodsmoke and supper settled in the air around them as the sea breeze dwindled to a calm with the onset of evening.
4 February 2020
Texas Jim
Prospect, Nova Scotia
www.granitecoast.ca
Category:Scenic
Subcategory:Landscapes
Subcategory Detail:
Keywords:blowing, breeze, coast, colors, contemplative, grass, haunting, long, mysterious, rock, sea, shoreline, soft, sunset, tall, tranquil
Jim Lindsey