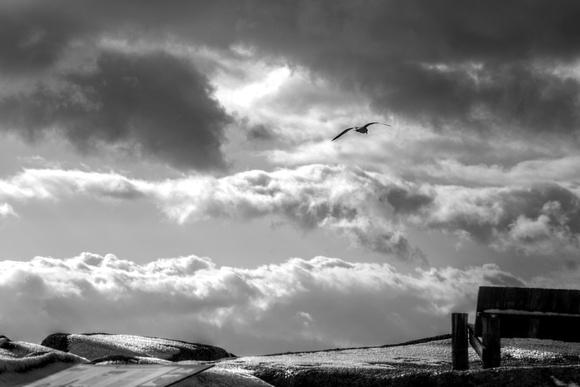 On a bench on a granite outcropping, with ice beneath their boots, the two women sat looking out at the ocean beyond Peggy's Cove, that was a tourist destination as well as a fishing village due to its memorable lighthouse and consequent gift shops, all of which were closed and shuttered for the winter. The taller of the two women wore a down coat with a fur-lined hood and the hood drawn close around her face. The other woman wore a thin cotton jacket with her shaven head uncovered. When they spoke their words were accompanied by little clouds of their breath.

"So," said the hooded woman, "you didn't want to meet at either your house or my house because you needed to get out. But it isn't really weather for being out. I mean, for walking, maybe. Not for just sitting here having an interview. Isn't your head cold?"

The other woman ran a gnarled hand with bony fingers over her smooth scalp. "I suppose so," she allowed. "It feels a little less than warm."

"Well, okay then," said the hooded woman, pressing her legs closer together and shivering a little. "Let's get started. What would you like to know?"

"I'd rather start with what you'd like to know."

"Fair enough. Fair enough. So, if it's not prying, before I ask the obvious, which is what you require in a companion, I'm wondering why you shave your head. Are you a nun or something? And your name, Cloud, that's unusual. I like it but..."

"Once there was a way," Cloud declared. "And I followed it. Like a cloud goes along with the wind. Not anymore, though. Now I just shave my head as a sort of a protest sometimes. Against all the unfairness. Against all the unkindness. So many wanting so much and so few having any. But I forget. The name reminds me how easily I forget. Okay, you're hired."

"But nothing. Come tomorrow. We'll figure out something to do."

Then she was up and moving, the shorter woman who called herself Cloud, and before the taller woman could summon another thought or even turn her head, she had disappeared.

"My name's Minnie," said the taller woman, because she thought it was something her new companion should know.

A seagull swooped by and hovered just ahead of her in the strengthening wind under clouds that had lowered and darkened. The ominous beauty both pleased and frightened Minnie.

"I guess we had better go too," she informed her gloved hands where they lay in her lap. "We don't want to get caught in a storm, now do we?"