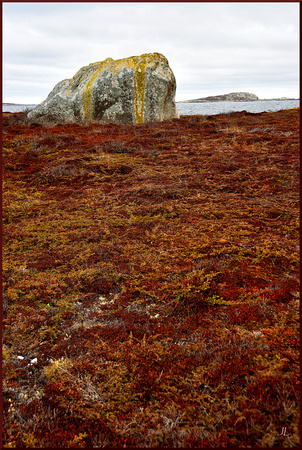 One Year After
Yesterday, after a session of rowga, I went rambling on Saul Island, one of Prospect's harbour islands. There's a house on it in which no one has lived for years. Perhaps this is why the wild aloneness of the place seems a little gentled. It was the eve of the anniversary of my mother's passing. I shot this photo at the north end of the island. This morning, on the actual anniversary, the thought of my mother and her great generosity and compassion arose strongly in my mind. While I was processing the photo, the image seemed to me to become, on the spot, her memorial. So now, although her actual tomb is in Texas, I have a monument celebrating her here, in Nova Scotia, by the great expanse of the sea, which fills a broken heart with joy.
Category:Scenic
Subcategory:Coastlines
Subcategory Detail:
Keywords:Hopson, Saul, atlantic, barrens, canada, coast, distant, furze, granite, island, lichen, memorial, north, nova, ocean, prospect, rock, rocky, scotia, sea, tribute
Jim Lindsey