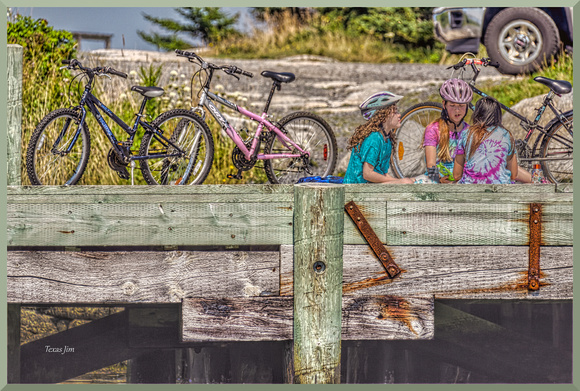 In Nova Scotia, a heat warning was issued. In Texas, as far as the heat was concerned, it would have been called a day of lesser oppression. But I haven't lived in Texas lately. I'm now 26 years in Prospect Village, and the villagers including me were getting all the cool ocean we could, some of us in the water swimming, some slightly above in boats or, as this picture shows, on the government wharf. Some were diving off the wharf into the harbour. These "biker" girls had their own thing going. Might have been cards - I couldn't tell from my vantage point in my boat. All in all, it was a good example of country life. I will never regret abandoning the cities, especially those inland, and I will never go back there, at least not for long. 🤠