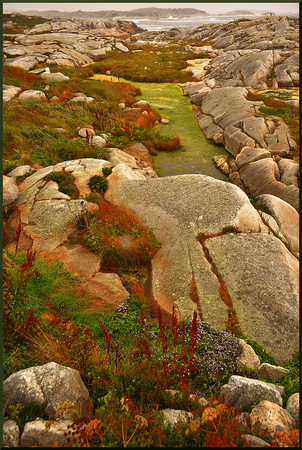 More Than Just a Lighthouse

Always when you go to Peggy's Cove, the eye is drawn to the lighthouse. But there's much more to the area. I often go there and deliberately ignore the lighthouse and so find much else of photographic interest. The other day it was four red chairs. This time it's a marsh encased in granite, an alley of verdant green that makes me think of the Spanish poet Garcia Lorca's line, "Green, green, how I want you green." I know it's a marsh and who would fall in love with a marsh. It just happens. Go figure.