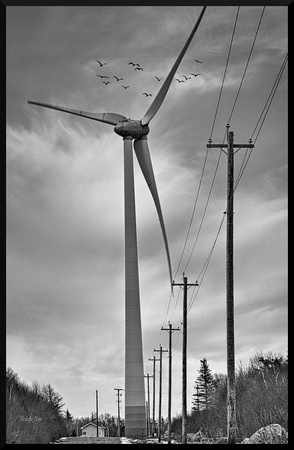 The Force in the Forest
Atha said, "Whoa, this is just like college, man! Remember? We'd do acid and drive around and get lost on purpose just to see what we could see."
"Yeah, I remember," said Pancho. "And then we happened by that shoot-out."
"Yeah," said Chi. "First thing I saw, motel sign, rooms, guy comes out of one and boom, cops shoot him till there ain't no chance he'll ever go on trial. Psychedelics were never the same."
"Guys," said Dominique. "Guys! Don't bend it out of shape. This is fifty years later. War's over. This is Nova Scotia, not New York. We're Canadians now and for a long damn time. Yes, we're stoned. But that's allowed now. And we're old guys. Yes, we don't know how we got here. But the dirt road we came in on is the dirt road we'll go out on. There's no way we're lost."
"I don't know," said Atha. "I don't know. It's hard to feel found anymore."
Pancho gestured up at the sky. "Birds!" he called out. "Hey, birds! That's low enough!"
"I don't know," said Chi. "We could bag 'em, all cut up already, and there you go. No need to worry what's for dinner."
Dominique laughed in spite of himself. His friends had always been like this. And they would always be his friends, no matter what. And the view? Well, the view was something in his wildest dreams he never thought he'd see. There was a force in the forest that was almost surreal, for sure. But it was his surreality, and it beat all.
He tugged his tuque down so it covered his ears. "No need to worry at all," he said. "Guys, we're here. We're right here. Hey?"
"Hey, hey, hey," they all cried out together. "Hey, hey, hey!"
1 March 2021
Texas Jim
Terence Bay, Nova Scotia
www.granitecoast.ca
Category:Science and Technology
Subcategory:Mechanical Devices
Subcategory Detail:
Keywords:and, bay, birds, black, canada, clouds, flock, flying, forest, lines, monochrome, nova, of, perspective, phone, poles, power, road, scale, scotia, sky, terence, turbine, white, wind, windmill, woods
Jim Lindsey