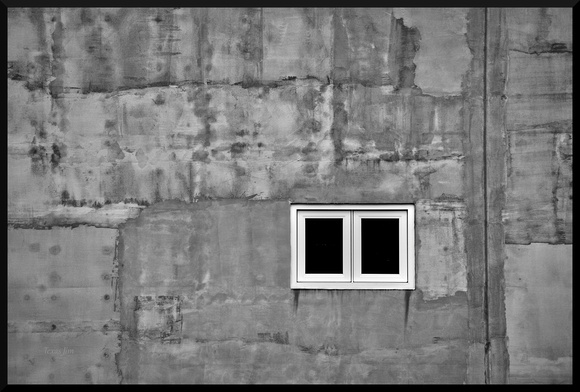 Unfinished
I figured someone would come. They usually do if I sit there long enough. I already had the shot, so I was just sitting there to see. Sure enough, there she came, a lean, unsmiling, white-haired woman in a worn shift that might also have been white at some time. She pushed her way through the leafless bushes and strode over the dead grass toward me with her eyes fixed on me all the way.
I smiled and called out the usual, "Hi! Just out taking pictures!"
"Taking pictures of what?" she said, when she was there by the car. "There's nothing here worth taking pictures of."
"You'd be surprised," I said.
"I would," she said. "So, surprise me."
I don't think Death itself would have surprised her, or the Devil. I think she would have stared them both down. But I was used to all sorts of receptions.
"Your house," I said, pointing. "That wall. That wall's a masterpiece."
"That wall is crap," she said. "It's been like that six years. It ought to have been finished. But someone drank too much and lost his job."
She stepped closer and leaned over to look in at me in my car. I saw then that not only was she outdoors in only an undergarment, but there was nothing underneath it either, and that she carried herself like an unsheathed knife.
"Say, you from the gummint? You here to make a case to take my house?"
"No ma'am," I said. "I'm here to make a case that there is beauty everywhere you look, if you open your eyes."
Would she reach in and grab me then? Would there be an act of violence? Or would she do the other. I waited and kept smiling and kept my hands on the wheel.
She did the other. The tears slipped out at first against her will and then more freely. She began to sob.
"There was supposed to be," she said. "There was supposed to be!"
I reached out then and took her bony hand in mine. "I'll bring you the picture," I told her. "You'll see."
And I did. Just as I had for so many others along that hard luck granite coast. I brought her the shot of her unfinished home, framed inexpensively of course because there are so many that I have to give. I brought it to her door. I put it in her hands. And I got back what I had meant to get. A little smile of gratitude. A little softening of that hard face.
What people see in what I give I never know, but in that moment that I make the gift I see what I am looking for.
That there is beauty everywhere.
28 February 2021
Texas Jim
Terence Bay, Nova Scotia
www.granitecoast.ca
Category:Architecture and Structures
Subcategory:Walls/Fences
Subcategory Detail:
Keywords:abstract, cement, concrete, new, unfinished, wall, window
Jim Lindsey