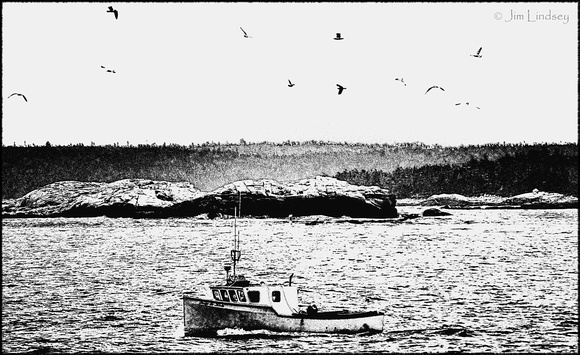 All in the Glorious Day

In honour of their benefactor, Little Mac and Big Bertha had renamed the boat they had purchased with Bertha's cousin Minnie's money. The Cape Islander was now Minnie the Moocher, because in fact Minnie had inherited her entire estate from her Hollywood husband, who had spied her among the extras in his movie Cradle of the Deep and taken her home from Nova Scotia as a souvenir.

"Little did he know," said Big Bertha from the wheelhouse to her own husband, still extant, in his deck chair out behind.

Little Mac was still doubled up laughing. "Little indeed!" he squeaked out when he could. Then the laughter overtook him again and again he gave himself up to it. And to the sea and the sky and the rocks and the woods and the easy progress of Minnie the Moocher. And to the seagulls their companions whose raucous cries were like laughter and who likewise seemed unable to get enough of the joke.

"Oh, you silly birds," he said, wiping the tears from his eyes, "what do you know? You are just like Mr. Minnie. You don't know!"

"You would think," he said to Bertha at the wheel. "You'd think they would have learned. They've been around since they was dinosaurs. And they still haven't learned. Look at 'em. What do they know?"

"How to fly?" Bertha said. She enjoyed Mac's good humour as she might have a show on the telly as she sewed, a show of which she was quite fond but that went on beyond her because what she was doing herself was her focus. And right now her focus was on being a captain, on getting to know her own boat. Which was almost beyond belief. The only other boat that had ever been hers, she had played with as a child in a tub.

"They think they know but they don't know," said Little Mac. "They think this boat is what it was, not what it is. They're expecting to get the old mackerel that Billy would give 'em when he freshened the bait in his traps. But we ain't got no traps!"

"Honey, please," Bertha said. "Go on and throw them the bread."

Little Mac eased up out of the chair, making sure of his balance against the roll of the waves, and went into the wheelhouse and gave his Bertie a squeeze and breathed deep of her smell and the smell of the boat that was still fishy ripe and the smell of the sea that was fresh as creation. Then he went and started pinching off bread and dispersing it here and there in the air.

"Here," he said, "the joke's on you! You're goldurn vegetarians now!"

And as the gulls swooped and plunged and arose dripping with their unaccustomed prizes, Bertha smiled and, steering to starboard of a rock that she remembered from childhood would be there and just barely submerged, said to her honey, "Ain't the joke on us all? We're free as birds, and we only don't know it."

And she laughed for the first time, and Mac laughed again, and the seagulls cried and laughed all around them, in the air, on the water, on the roof and the gunwale of the re-purposed Minnie the Moocher, all in the glorious day.