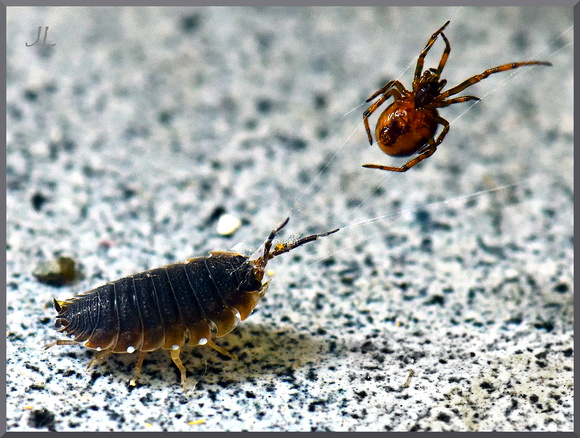 Noah was standing in the cove up to his neck in the water and crying and Sir Barksalot was running back and forth on the shore making his own discomfort with the situation highly audible. Alvah Norris was watching with her binoculars from an upstairs window in her house across the road. At one time this would have been something to gossip about with her friend Margie Ott over tea. But she had come to know and like Big Bertha, Noah's grandmother, and to see that such gossiping was hurtful, and so instead she gave Bertha a call.

"Does he look like he's in trouble? Is he drowning?" said Big Bertha.

"No, he isn't," said Alvah. "I think he's standing on the bottom. He's not splashing or calling out or anything. He's just crying."

So Big Bertha left off her pie preparations, which at the moment consisted of cutting stalks of rhubarb from the monstrous rhubarb plant in her garden, and went out and around to the dock.

"Here, Mr. Noah," she called. "What's the matter? What are you doing out there?"

"I tried to save it," Noah said, his tears streaming down, "and I couldn't. I just sat there and watched it get killed."

"Well, whatever it was," said Big Bertha, "it won't help it for you to catch your own death of cold. Now come out of there and let's get you dried off and you can tell me all about it."

"Well, I never," said Big Bertha. "Noah, honey, if you don't come out then I'll have to come in. And you know I'll get stuck in the mud. And then how will you feel about that?"

"Can't you just let me be?" said her grandson.

"No, I can't," said Big Bertha. "Besides, I need someone to help me make a pie and have the first piece with a scoop of ice cream afterward."

"That won't make me feel any better."

"But it will make me feel better. And getting stuck in the mud will most definitely not."

Being not yet too cold to not think anymore, and seeing that otherwise he would only cause further suffering, Noah slogged in slowly to the ramp beside the dock and stood shivering there and then fell over with a splash.

"Lord, Lord," said Big Bertha. As quickly as she could, she made her way down the ramp, stepping as carefully as she could but still heavily and awkwardly over the slippery seaweedy crossties and crosspieces, and picked the boy up out of the shallows and carried him indoors.

When he was toweled off and dressed in dry clothing and obviously out of all danger, Bertha had him help her finish harvesting the rhubarb and then sat him up on the counter while she worked at the pie.

"It was just a little pillbug," Noah said finally, having been silent the whole time. "Just crawling along on those tiles by the front door. I thought I should put him outdoors. I went to get a piece of paper to slide under him and carry him out with. And when I got back, the spider was there."

That was all he could say for a while, then when she had mixed the sugar, flour and orange peel into which she would stir in the rhubarb, he went on. "I might could have saved it. I might could. But instead I just watched. At first it seemed like the spider was kissing it. And then when the pillbug was still after that, the spider started going back and forth, and underneath and around, till the pillbug was wrapped in its web. And then it carried the pillbug away. And I watched the whole thing. And I didn't do anything."

"Honey, spiders have to eat too," said Big Bertha. "And pillbugs are one of the things spiders eat."

He was inconsolable, even after his pie and ice cream, and when Delilah his mother tucked him in that night, he cried himself to sleep.

The next morning, among the stack of shoes beside the door, he found what was left of the pillbug in the spider's web and laid it on the piece of paper with which he had meant to take the tiny creature outdoors when it was still alive. He took the paper out and put it with the pillbug's husk on it into the water and watched as the offshore breeze moved it away. The little death barge sailed several yards and then sank. And then Noah went walking with Sir Barksalot but would not throw a stick in the water for the dog to retrieve.