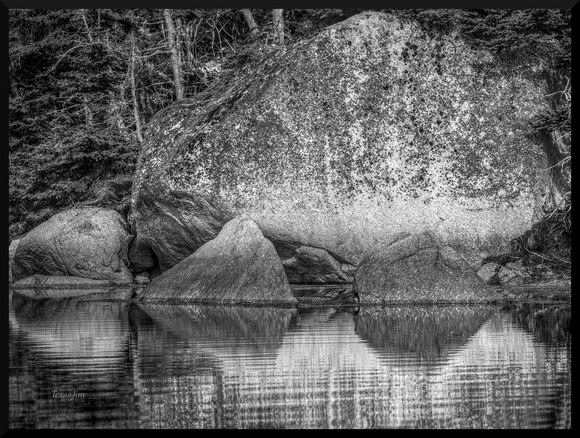 Granite Coast Portraits
"Hidden Shining"
Our little fleet of kayaks crossed into the pool over a corridor only inches deep. A bend in the corridor kept the pool from being seen from outside. Inside the water was calm and clear, with no indication at all of the commotion and spray in the open. The only fluctuation in the mirror of the pool was due to ripples we ourselves introduced. As these died away, we contemplated where we were and what sort of secret we had snuck into.
"Those rocks," said Emmanuel. "They ..."
"They make a shining," said Sondra.
"A hidden shining," I said.
The hillside was steep and the underbrush thick so we had our picnic afloat. It was a quiet affair. After our ordeal in the waves, we just wanted to rest. But there was magic in the place, enough to elicit a few more conjectures.
The big rock seemed to me to be a jewel, a great jewel that had slid down the hill, to be held at the edge of the water by the fingers of the spirit that was the place's protector.
"It's three creatures nursing their mother," said Sondra.
"They're just rocks," said Emmanuel. "Pretty rocks. But maybe they ... maybe they'd like us to stay for a while."
We stayed a while longer. Then the lowering tide would have stranded us. We made our way back through the crossing, the kayaks scraping in places, and soon were in the storm again. We got home from the islands to the village exhausted and soaked and loaded all the boats onto our separate cars and departed.
We never went there again, or even were ever together again. But we kept in touch. We called ourselves, as a sort of inside joke, the Secret Shiners. And it never grew old.
26 February 2021
Texas Jim
Rogues Roost, Nova Scotia
www.granitecoast.ca
Category:Scenic
Subcategory:Coastlines
Subcategory Detail:
Keywords:and, atlantic, black, canada, coast, coastline, granite, hidden, inlet, islands, luminous, maritimes, monochrome, north, nova, ocean, pool, reflection, rock, rocks, rocky, rogues, roost, saltwater, scotia, sea, trees, white
Jim Lindsey