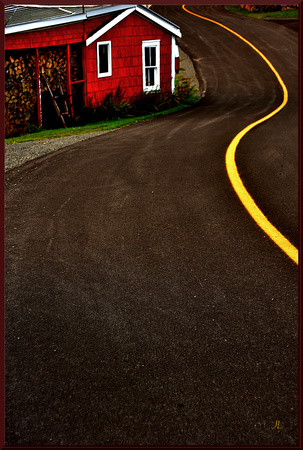 Daddy Mac's mind is like a full moon. It lights up the darkness with a light that is silvery, soft and comforting. And his heart is so big I think you could sail an ocean freighter through it.

But his body ... I was worried about his body. No sooner had he gotten over being crazy about Ma Bertie's death than he began to have accidents.

First, we were all going to watch a movie together and have supper at the same time. So Daddy Mac made shrimp and rice and put it in bowls and we all were going to carry our bowls into the TV room and eat there and me and Noah and Sir Barksalot and Cousin Minnie were already there when Daddy Mac stumbled and fell with his bowl. He fell flat across that big low table by the couch where our bowls were already. Well, Barkie's was on the floor. Anyway, Daddy fell and his bowl went flying up in the air but he kept the plate in his hands. And the bowl actually came down on the table right side up with all the food still in it. But the plate broke in Daddy Mac's hands when he hit and it cut him bad and then we all had to go to the hospital and get him stitched up.

Daddy says that his knee just gave out.

Then he went out in his dinghy for a little row out to the channel marker buoy. He had his hand all bandaged up and it was sore but he said it was okay that where the cut was it was out of the way and also the ocean was calm. And he was right about that hand but then the other hand seized up and somehow the shock of that caused him to pitch that oar into the water so he was stuck out there. Of course he had his phone with him and eventually managed to give us a call and we came to get him in Noah's Ark and so that was all right except he was trembling because the weather has turned and it was cool to cold out there and it was after dark when we got out to get him.

He says his hand just jerked like it was someone else's and he couldn't get it back.

There have been other things too. But those were representative. And I am not going to record what happened to him in the shower.

Anyway, it all had me so worried that I asked him if he would do less, let me do more for him, and above all stay off of the ocean, that it was no friend to old men.

He is a very proud old man. I thought he would object. Instead he agreed. "My dear daughter," he said, "you sound just like Bertie. And she was always right. Very nearly always. Except when she wasn't. And marrying me wasn't such a terrible mistake after all. At least for me."

He said that anyway he had several small things to attend to. Little things like himself. Things that would oblige him to slow down tremendously. Things on dry land of that sort were aplenty, he said, and would serve the purpose just fine.

It rained the next day. There was a call from the school for him and he didn't respond when I called out. Now, it's not that big a house even with Cousin Minnie's new quarters added on, so I looked out the window to see if his dinghy was on the skidway. It was. Then I went to the other side of the house and looked out at the driveway and his old truck was still there. He wasn't anywhere I looked until I put on my raincoat and ventured outside. And there he was by a rain gutter, watching the water splash out on the ground. He was sitting right down on the wet earth, cross-legged, leaning over to get his face as close to the flow as he could. No raincoat. No umbrella.

"Delilah," he said, "Don't you worry. It's just water. You just get wet. Besides, I need to be part of it if I'm going to examine it."

Later on, around the supper table, he said he had discovered that the water was not one thing or many. When it flowed it seemed like one, and when it splashed and came apart it seemed like many. But it was just a seeming, he said. An illusion. In fact, he said, water was proof that our lives are a dream, because we're made of so much water and it comes and goes and so we're neither one with everything nor separate.

It was the tastiest meatloaf he had made for our meal, and everyone was really chowing down. So no one even said that they had no idea what he meant, least of all me. But his words stayed on my mind. When I lay down that night, when I woke up in the morning, they were there, those words, and they had an echo, and the echo it went on and on till even when I couldn't hear it I could hear it.

The day after that he went out on a drive. I was working away at one of Mama's old patterns so when he called and told us where he was and said to bring everyone to come see what he was looking at, I didn't want to go. But he insisted in that super kind way that he has that is so irresistible and so off we all went.

He was over in east Dover, parked by the side of the road, standing up in the bed of the pickup and peering down the hill at a curve in the road. "Now, you see that?" he said. "That is purely mystifying. That's eternity right there, looking still but really ever-moving. Makes me dizzy. And that house. Yes it looks like a safe place to be, but it's really just something to knock up against in that river that looks like a road. Something to send your boat spinning till you lose all direction. Now come up here and see for yourself and say if it ain't so."

Any other family, someone might have piped up and asked what he'd been drinking. And he looked at each of us in turn, even Barkie, so as to give us the chance. I mean, I knew that. But nobody thought he was drunk, or crazy, or even kidding. We all knew our pint-sized patriarch was good, and that somewhere in his words there was wisdom, even if we didn't know what it was.

He is a big man, Daddy Mac, that everyone calls Little Mac. And you don't have to understand him. He is big like the sky, that you can't understand either. And I think tomorrow if he shrunk to the size of a grain of sand and blew away, he would seem even bigger, like the heavens on a starry night.

He wasn't drinking, no. But I am a little bit right now in hopes it will inspire me. So I can give my love for my daddy its proper expression. I'm having one of those strong beers he likes. But I don't feel inspired after all. Only dizzy. Yet still mindful of my great good luck in being born to such a man as him and to my mama that they called Big Bertha. So small and so big it makes you feel size really has no meaning. Oh Lord, now I'm talking like Daddy. Now if only I could walk his walk.