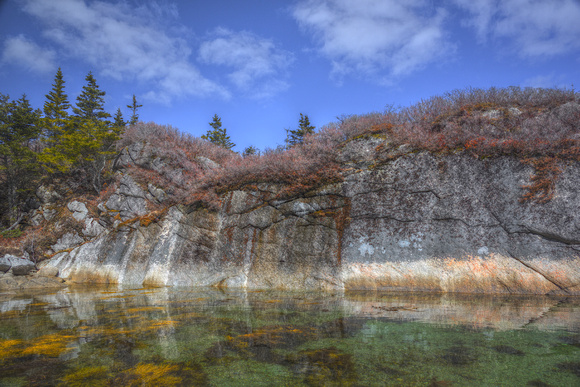 Council of War on the Moon
The King and the Admiral on the flagship of the royal navy were adrift in the Sea of Tranquility.
"I love this place, Admiral, don't you?" the King said. "It's so cool. You don't even have to drop an anchor or pull up on the beach. The wind just can't get in. At least not much. I think we've moved a foot or so. And that back and forth in the seaweed. It's a perfect fortress."
"It's all right," replied the Admiral.
"You're awful quiet. Usually you talk a lot more. You know, you've got to play your part."
"I know. I'm trying. It's just that this damn-panic's on my mind."
"What damn-panic? What's a damn-panic?"
"Near as I can tell, it means the whole world's getting sick. You ain't heard?"
"I know what's happening on the Moon. No sickness on the Moon, sir. Is there sickness in the fleet?"
The Admiral heaved a sigh and adjusted the tea cozy that was his official headgear just as the pie-tin-crown that the King wore was his. "Not that I know of ... your Highness. But they say that it's comin' our way. And Mama Dee says everybody's goin' crazy. She saw people fighting at the grocery store. It made her cry."
"My mama mostly doesn't tell me anything," the King said. "That's why I'm out here on the Moon most all the time."
"Yeah?"
"Yeah."
"I guess we're safe out here. I guess no one will come and make us sick out here."
"Guess not. But maybe we should keep a lookout anyway."
"Guess so."
"Alert the fleet!" the King said suddenly and with authority. He took an oar and stamped it on the floorboards of the boat as if it were a royal scepter. "Shots to be fired across the bow of anyone as dares come near!"
After his show of force, to which the Admiral failed to respond, the King was left as if helpless. He looked to the cliffs. He looked up to the clouds and then down into the clear still water of the tiny island inlet. And found no furtherance anywhere.
They sat for a while as if a war were going on already in their minds and hearts. And then the Admiral said, "I have to go be with my mama and my dog. Do you want to come too? We have plenty of food."
"I reckon I will," said the King. "Yes, I reckon I will. Sure is nice here, though."
"Yes it is," said the Admiral. "Reminds me of my Daddy Mac. Open, spacious and relaxed, like he always was sayin' was the best way to be. So somehow I guess we have to take this with us."
"I guess we do," said the King. "Yes, I guess that we do. Mr. Admiral, sir, make it so."
The Admiral nodded and picked up the oars. And then the flagship came alive.
17 March 2020
Texas Jim
Prospect, Nova Scotia
granitecoast.ca
Category:Scenic
Subcategory:Oceans
Subcategory Detail:
Keywords:calm, canada, clear, clouds, coast, contemplative, crystal, furze, granite, inlet, island, nova, prospect, rocks, rocky, scotia, seaweed, underbrush, water
Jim Lindsey