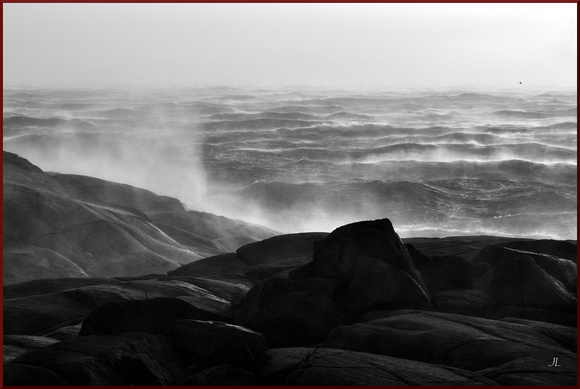 When the Lights Go Out But Not the Love Light

Big Bertha lay there in the pitch dark. Beside her, Little Mac was snoring so softly that it made her think that moths would snore like that if moths could snore. It was a wonder she could hear him at all with the wind so loud outside.

Sleep was not about to come. She fumbled for the flashlight on the bedside table. When she found it she used it to help her find the matches. When she found the matches she lit the candle, a beeswax candle Mac had given her for Christmas. It smelled so good, like honey. She breathed in the honey smell and held it in. It made her feel that little smidgin better that she felt that she could go ahead with what she thought would be a good idea to do.

She picked up from the table, where it lay by the candle, the brand new diary Mac had also given her. She rubbed her thumbs on the white leather cover with its gilt border. She pressed the book to her nightgown, against her great bosom, that was as close as she could get to her heart. She thumbed open the brass latch.

"Windstorm, power outage, food poisoning, perfect storm," she wrote as her first entry. "We've been up and down and to and from the can all night. Mac sleeps in between trips but I can't seem to. He thinks it's all because the turkey wasn't done when the power went out. I don't know. It tasted fine to me. He blames himself for stuff sometimes that ain't his fault. Could have been the pease porridge the kids brought. Thought it was a mite off. Or that wine the grandkids brought. They mean well, but making wine is something that they ought to get a little better at before they trot it out as gifts."

She put down the pen and listened to the storm, a storm of nothing but wind but a wind so strong it made the wall behind her vibrate. She could feel it through the pillow that she leaned against.

She had written all that she felt well enough to write. She lay listening. A further sound she heard was that of someone's stomach gurgling. She could not tell if it was hers or Mac's. She gave a pained little chuckle and put her arm around her little man. Sure and they were like one person sometimes. Then she heaved herself up and went downstairs to put another log in the woodstove, that with so much wind was full of dancing flames even with the vent fully closed.

Lord she was tired. She prayed for morning to come soon. And for her Mac to live a long long time. Much longer than she thought he would.