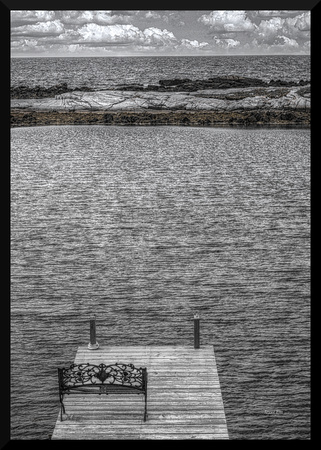 Ciaran waited in the chair beside the bed until his father woke and then when they had exchanged what pleasantries were suitable, he said, "Dad, I'm trying to put things in order like you said. The house is tidied up and the dock fixed up like new. The realtor said it all looks good. Except for one thing. That iron bench. She says we ought to put it in the middle. She says that would be perfect. I started just to move it, but I know how you get when things aren't where you like."
His father coughed, and then coughed again, and then went off in a series of coughs that made it sound like he was dying. Which he was. Having heard it before, Ciaran waited till his father was done and then waited some more to hear what he might have to say.
The invalid cleared his throat and then cleared it again and again and finally was able to speak. "You know why the dang thing is there at all. Your mother wanted it. She liked to sit there and look out. Said it cleared her heart. That's what she said. She wanted it square in the middle too but I refused to do that. You fish you got to carry stuff. You got to have room. And I couldn't keep movin' it. You don't screw a thing down on the dock you gonna get it blown away. Even bloody iron you got to screw it down."
Ciaran waited and listened to several of his father's whistling breaths then he said, "Right, Dad, right. I know. But hey, you're done fishin'."
"I ain't dead yet. And even then, I want that bench to stay right there. That's how I remember your mother. A little off to one side but always smiling. Always loving. I could be drunk as a lord. So there it stays. You hear?"
"There it stays, Dad. You got it. Hey, you thirsty? I see your glass is empty."
"Yeah, but don't try any of your tricks with me. You know how to fill it."
"Yessir, I do. Because fish fornicate in water."
There was one book on the table by the empty glass. The title was A Fisherman's Friend. Ciaran took out the bottle inside and filled his father's glass. Then he went out. His father was already sleeping again.