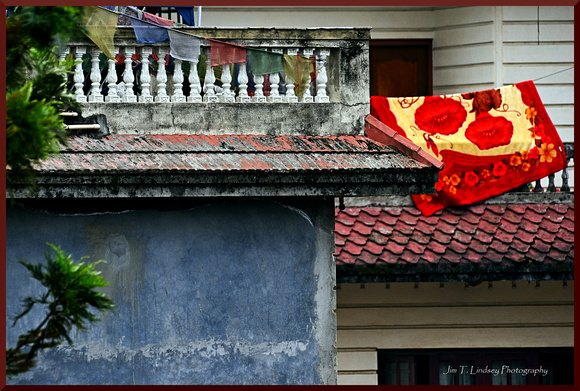 Across the Courtyard from Dondrub Guesthouse 2 for web DSC_3552

Now he was done with being Sonny Boy for sure. It was as if he had died and been transported to another realm. He was in Kathmandu and the language was not understandable and for the time being he had no companion. Yet he was far from feeling lost or confused. In his room that Deuteronomy had got them, himself and the woman who said that she was Allison his aunt, there were big sliding glass windows on opposing walls, and you could open them and their screens too and sit out on a sort of a balcony, and he was suddenly in summer on the far side of the world and the rooftops were festive with flags of all colours and banners and there were strange horns and cymbals and drums punctuating the peacefulness with a very unmelodic music something like a whale fart symphony that nevertheless cheered him up and left him feeling that there was no problem anywhere.

Sure Aunt Allison had gotten sick. And she was in a hospital somewhere in the foreign city and not around to tell him what to do even about getting food. And dogs had barked till late at night and there had been a thunderstorm louder than he had ever heard that exploded his thoughts every few minutes till long after midnight. But when he awoke early the next day, even his hunger was nothing he minded. The room had an electric kettle and so he had hot water in a cup, and there was paper and a pencil and a chair and so he was out on the balcony writing a letter of love, of what he thought very well might be love.

"Dear Jovina," he wrote, "well, I was wandering around. I was pretty well lost and I couldn't understand what anyone tried to tell me when I asked for directions to get back to my room. And I got in a crowd and got carried along and then there was this ceremony. We all sat on the ground and there was bald-headed monks in burgundy robes and there was chanting and more of that whale farting and clashing and drumming and one of the monks who must have been the boss monk, he sat down on a chair and he gave us a talk. I don't know what he said 'cause it sure wasn't English, but when he was finished the monks had us get in a line that led up to the boss.

"Now he was patting people on the head and saying something to them. And his voice was really soft until he got to me. When I got there he hollered so it hurt my ears and whacked me on the head with his knuckles so hard it raised a bump. And then he smiled and I have got to say Jo that I didn't mind at all what he had said or done 'cause Lord that smile it made me want to laugh and cry all at the same time. Guess I hung around too long 'cause suddenly another monk was leading me away.

"And you know what, Jo? Let me call you Jo please, 'cause Jovina that won't do for how I want to be with you. Which is ... well, we'll find out. Anyway, what happened next was I found out what he had said. The boss monk. 'Cause they gave me a little paper with some of that fancy scratching on it that's their language. And when I finally got a cab to take me back here to this room, I showed the paper to the driver and he told me what it meant.

"That driver was a funny guy. He had a big grin so you saw that he was missing teeth, and he said, "Sir, sir! You have taken refuge. And you didn't know! Ha, ha! And you got a refuge name! And he call you, in English is something like, Big Sky with Room for Everything. That's good one! That's a good one!" And he pulled up next to an old guy on the sidewalk who was limping along turning what they call a prayer wheel and muttering to himself and he told the guy my name and that guy, he grinned too and shook his wheel at me and laughed and laughed.

The man they had called Sonny Boy stopped writing for a while and sat there on the balcony with his mind like the blank cement wall across the courtyard and the pigeons on the balcony rail cooing deep like little passionate engines that were starting up to help him with his new start and he didn't mind that the smog hurt his eyes and was making him cry. Because maybe he was laughing too.

He wrote, "Well, you're gonna think I talk too much so I had better stop. Won't you write too? 'Cause you got things I need to hear, I'm pretty sure. I hope that's what comes next. 'Cause you are like a white cloud. And I feel like a white cloud in a big sky would be just the thing."

And he signed off with his new name and had to get the letter and chair back in through the sliding window in a hurry. That was how sudden the rain came.