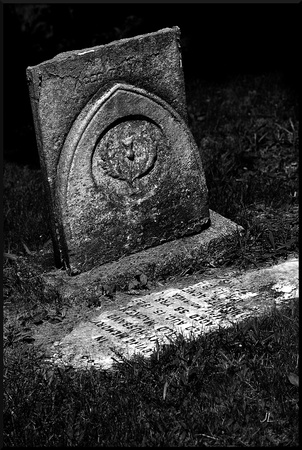 It was moonshine but smooth as could be. So Pearly Gates, as he was known, got a kick out of not telling people how strong it really was. He would pour as much and as often as he was asked to and do it with an obliging smile. And then with the patience of the devil wait to see what happened next.

"You want another sip?"

"Oops," said Pearly, when he had filled the tall glass to the rim, "Forgot to leave room for the ice."

Then it was sometime in the evening and he was somewhere in the city. Everything seemed to be happening in fragments. He was listening to a blues band at Bearly's. He was sharing his barbecue with a good-looking blonde. He was buying her beers. She kept wanting to dance.

He was in an alley, urinating on a wall. A full moon overhead was making him too visible. He tried peeing into the sky to put out the light. And then he was all wet.

He gave up on his car and the blonde. All he wanted was Delilah. He started off toward her village. A taxi pulled up alongside. He waved the driver off. He didn't need any help. Why would he need any help? He would run the whole way. It was awkward running in his cowboy boots. And then it was painful. He slowed to a walk. No more taxis came by. And nobody answered his thumb.

It was almost dawn and he was almost there. By God she will be good to see he thought. He imagined her taking him in and helping him off with his boots and taking his blistered feet in her hands and tending to them. And after a while they would wake up together and their son Noah would come jump in the bed the way he always had. And he would hold them both again and swear that he was home for good and always.

He was not walking so much as dragging each foot from one place to another. Twenty miles in high heels had exacted a toll. And then he was abreast of the village cemetery with only a mile to go and that all downhill. He could hear the breakers on the High Head and see them in the distance making flecks of dimly lit whiteness against Bald Rock. Almost there.

And yet all in. His feet rejected his weight absolutely. He considered crawling. Instead he opted for the cemetery. His uncle Mordecai was buried there and he had loved his Unc Mordy. He would find the grave and have a little nap and then proceed. But all the graves seemed unfamiliar. Momentarily he pitched forward by the headstone of someone who had been a long time under, far longer than his uncle. "Meanin' no disrespect," he muttered as he closed his weary eyes.

He was out of sight of the road and no one saw him lying there. When he woke up in the noonday sun with a sunburnt face and his brain in a vise and with legs that might have belonged to someone else for all they would obey him, he was all alone, with ants trailing over one arm and a butterfly on his nose.

"Thank goodness," he said to the butterfly. "For I was almost there. And she would not have let me in but to have me committed."

Then the butterfly left him to the ants, for the sound of his gratitude was nothing that the little winged being desired.