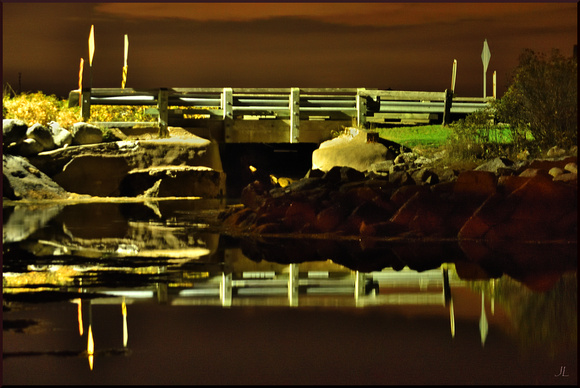 One End of My Island, at Night
Prospect is really two islands at the end of a peninsula. Two small islands, with a very few houses on them, joined by two bridges. This is the second bridge. I live within a stone's throw of this bridge, on the island between the mainland and the second island. Normally it doesn't seem like the village is a couple of islands. But seeing the bridge at night, accentuated by a street lamp, caused me to contemplate the fact.
Category:Architecture and Structures
Subcategory:Bridges
Subcategory Detail:
Keywords:Canada, Nova, Prospect, Scotia, bridge, cove, islands, lamp, light, night, reflection, street
Jim Lindsey