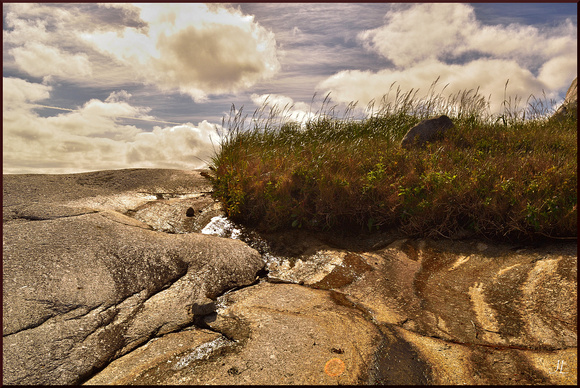 The Extent of the Soil w border DSC_0205

Episode 71. A Brief Window to Forever

"Why don't we all go together?" said Noah.

"That's a good question," Little Mac replied to his grandson as Noah rowed the two of them across the harbour to Saul Island. "Why don't we, Barky?"

The dog in the grandfather's lap barked once and again twice.

As the dinghy bumped the granite shore, Barky bounded from Little Mac's lap and hit with a splash in the shallows. Ashore he shook himself so vigorously that the spray wet both the boat's remaining passengers.

"They wanted to go out far," said Noah, pulling in the oars. "That's why. And Barky wants to stay in close and play."

"Every dog has its day," said Little Mac. "And that's as good a reason as any."

They pulled the boat up on the rock and went exploring. Barky started a deer that had been hiding behind the abandoned house on the island. A buck with sizable antlers, it easily outdistanced the dog through a pocket of deep underbrush and plunged into the harbour and swam toward the village.

"I like little adventures," said Noah. "I didn't know deer could swim."

The dog barked and barked and looked back at them with one paw in the water.

"No," Noah called, and he whistled and Barky came running.

They circled the entirety of the little island, bending to pick up curiousities of driftwood, a plastic bottle that had washed ashore and would go in the trash and a battered buoy that had parted ways with its lobster trap.

There where the thin carpet of soil and grasses ended, they sat under clouds and a jet trail and looked out to sea at Noah's Ark, a small old Cape Islander that was named after Noah and steered by Big Bertha his grandmother and crewed by Delilah his mother. The afternoon blow was getting up from the southwest and the former fishing boat was plunging through the whitecaps.

"I like little adventures too," said Little Mac, "and a good thing, because the big ones have pretty nearly worn me out."

"I'm going to have some big adventures too," Noah said, "and get all worn out just like you, Daddy Mac."

Running a hand gnarled with age and wear and arthritis through the boy's hair, Mac replied, "And so you will, dear heart. And so you will."

The wind was cool and bracing and the rock beneath them warm, and so they sat together looking out to sea, as if through a brief window to forever.