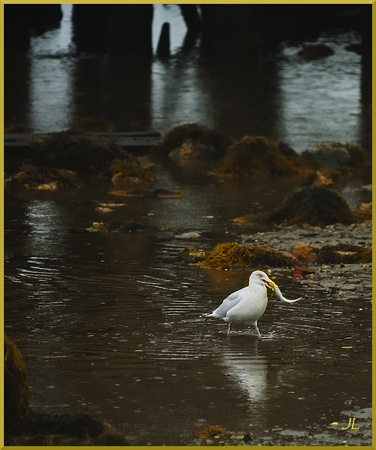 The snow had turned to rain and the temperature risen a couple of degrees, so Little Mac and Big Bertha ventured out with Little Mac holding the umbrella.

"Would make more sense for me to carry it," said Big Bertha. "With you holding it so high to try and cover us both, one gust of wind and you'd be gone like Mary Poppins."

"The gentleman should carry the umbrella," Little Mac replied, though already his sore elbow was taxed with the extension.

"Hogwash it may be," said Little Mac, "but if we're seen with you carrying it, I'll never hear the end of it."

They walked through the village to the end of the land to see the surging sea, made a stop at the government dock to regard the harbour that winter had emptied of moored boats, and, after observing that the cloud of seagulls following Joe Duggan's boat in was a little thinner than usual, retreated to their own dock and the chairs that were bolted to it to keep them from blowing away.

Big Bertha laughed at a gull she watched catching a fish in the shallow water of the cove, it being low tide. "Now would you look at that creature," she said. "Figures the pickings are too slim at Joe's so it goes after its own. And ain't it brash as a banker with a big seegar now that it's got it. Hee hee!"

"I don't know how bankers look these days," said Little Mac. "I imagine they're a little more refined."

"And look at it swallow the thing whole. Must feel odd, having a live fish wriggling in your innards."

Looking solemn, never lowering the umbrella an inch though by now his whole arm was aching, Little Mac replied, "That's how the world would swallow me, Bertie, was you not here. And I don't imagine it would feel a thing."

They stayed sitting long after the gull with its swollen belly had swum drunkenly away. When she thought the evening had enveloped them enough, and that no neighbours would notice, Big Bertha relieved her husband of the cumbersome umbrella.