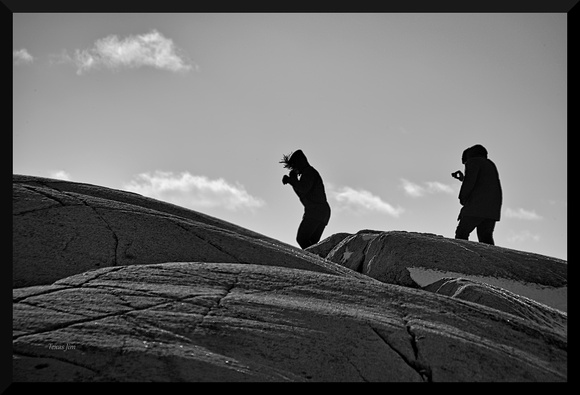 "Look, Chez, if I don't have no pictures, I can't get no fights."
"I know, I know, I'm just sayin'. Why the pictures got to be out here? We could do 'em at my place. We could do 'em at your place. Why it's got to be out here?"
"Because, Chez, I'm the Granite Coast Kid. I'm all about the Granite Coast. Where it's frickin' hard. Where it's frickin' cold. When I come into the ring, I want 'em scared of me already. I want 'em thinkin' hard as rock, cold as icebergs. That's my edge, Chez. That's my edge."
"But you ain't had no fights yet. You ain't even got no manager. Why you so worried 'bout a frickin' picture?"
The Granite Coast Kid jabbed and swung and danced on the cliff, careful to avoid the snow and ice and slipping and falling into the foaming frigidity of the swirling grey waters below.
"Chez, I ain't goin' to be no champ. I'll never make it up the ranks. What I can do is piss somebody off. Somebody ranked already. Make 'em take a fight with me. I watch the news. I seen it work. Then it's payday, win or lose. You got to get with it, Chez. You got to get modern, my brother. It's not about winnin' anymore. It's just about makin' that money. But hey, I'm all ears. Ain't got no cauliflower ears. You got a better idea, speak up. Hey, we'll go home right now."
Chez took the pictures with his phone. With one hand while he kept the other tucked in his jacket. He knew when he had disagreed to a dangerous point. And maybe it would work. There was nothing to lose.
But sometimes he wanted to cry. And the fact that he couldn't admit it, not even to himself, made him feel really crazy. It was a very quick thought that passed through his mind. So quick he couldn't remember it later. But in that moment, for a fraction of a moment, he knew all he needed to do to be free of his childhood friend and his friend's insatiable nowhere-going was to give him a little push. A little push in the right direction.
And then scream for help.