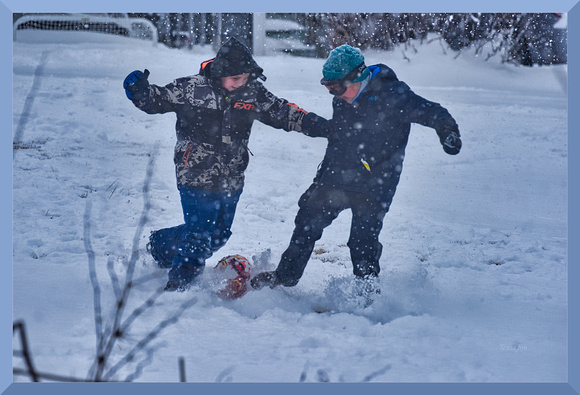 My Name Is You Don't Know
Nearheart had a pride that did not care how good she was at anything. So when Farhead said she could work as a background actor while scenes were being shot in their house, she scoffed.
"I've met the stars," she said. "Anything else you can keep."
Farhead knew from the look in her eye that there was no appeal. Yes, they needed every cent they could squeeze from this movie. No, he would not bring that up. Peace of mind was a precious and fragile commmodity. He would rather risk being broke.
He suffered her scorn in admitting he himself had agreed to the job. He would appear as a butler to the millionaire courting the fisherman's daughter. In their own home. Where he had played host to the actor portraying the millionaire. He would not have any lines. He would barely be noticed. In fact he felt so small in Nearheart's estimation at that moment that he wondered if he even existed.
So Nearheart took the car and abandoned him to his diminishment.
It was snowing. There was nowhere she wanted to go. She just drove until she saw some children at a playground. They were three young boys engaged in a game of soccer. Engaged furiously, so the snow flew and they slipped and fell when they kicked. Their masks and the occlusion of the falling flakes made their expressions uncertain to her. She could not tell if they were having fun. There was a picnic table to one side. She got out and went to sit there. She thought they were paying her no mind. Then as they passed to one side, the largest of them swiveled and launched the ball right at her. Surprised, still she managed to catch it.
The boy slogged toward her through an unbroken drift. His companions had stopped everything to watch. When he was close, so close Nearheart in a near panic feared he didn't want the ball at all, he stopped and stared and finally said, "Our mama died last night. What's your excuse?"
"I'm sorry," said Nearheart. "What's ... what's my what?"
"Your excuse for being here. That's what the last grown-up asked us. You're not the first to stop. I hope you're the last."
"I um ...", Nearheart struggled to answer. He wasn't taking the ball. She decided on the spot not to treat him like a child. "My excuse? Well, I don't have one. I don't have anywhere I need to be. It's just come to this. What's your name?"
"My name is You Don't Know," he said. "And my mama is dead."
Then he said, "You can't give me the ball. You have to kick it in. That's our rules."
She steadied herself on the solidly frozen-in picnic table and lurched upright. "Well then damn my eyes and off you go!" she hollered and gave the hardest kick that she had ever given.
She expected the boy to take off running. His brothers did. Instead he approached her again, so close she nearly panicked again. And then he reached for her.
"Will you give me a hug?" he said.
"That's what he said," she said to Farhead that night. "And yes I did. I gave him a hug. A little bit of one. But you can never tell. And so I didn't ... I didn't ... "
She let Farhead give her a hug. As long as she wanted it and then a little longer. Just a little bit longer.
"You can't give me the ball," she managed, in a tearful hoarse whisper, at last. "That isn't our rules."
15 February 2022
Texas Jim
Prospect, Nova Scotia
www.granitecoast.ca
Category:People
Subcategory:Kids
Subcategory Detail:
Keywords:boys, canada, falling, football, goggles, nova, parkas, playing, prospect, scotia, snow, soccer, two, winter, young
Jim Lindsey