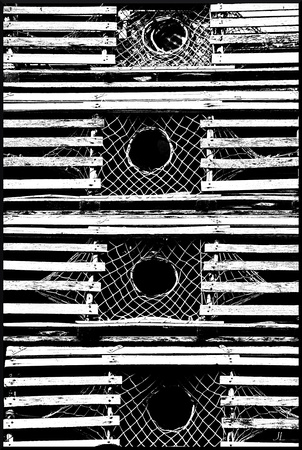 Episode 45. The Way In Is Not The Way Out

Big Bertha finished the new blue tea cosy and handed it to her grandson Noah, who immediately pulled it onto his head and called out, "I'm ready, Granddad. I've got my thinking cap on!"

"Is it working?" said Big Bertha.

"Are you happy that I made it for you?"

"Then it's working. Give your grannie a hug and go play."

The little man with his red tea cosy cap and the little boy with his blue one slogged hand in hand down the lane through the slush of yesterday's snowfall with the sunlight playing over them reflected from the small glittering waves in the cove. Outside, the great ocean was a blinding mirror.

"That is excellent," said Little Mac. "I don't think Sir Barksalot's is."

Noah's mongrel companion ranged alongside, leaping through the deeper snow on the side of the lane that sloped down to the cove and unsuccessfully chasing anything that moved, field mice among the rocks, song birds in the saltwater rosebushes and his own tail when nothing else offered.

"Granddad, what are we going to think about today?"

"Hm. Well, I'll tell you what I usually do. I let my eyes decide. Whatever catches my eye, that usually sets me off. Do you see anything that looks interesting? What do you spy with your little eye?"

They had branched off the lane toward Gilly Christian's stage, to one side of which, in the shade of a stand of firs, was a stack of old lobster traps. Noah pointed and said, "Those!"

"Good choice," said Little Mac. "Well, what are those?"

"Your cap is definitely warming up," said his grandfather. "Those are Gilly's, and Gilly is a fisherman whose traffic is mostly in lobsters these days. So what do you think those are for? Right, for catching lobsters. Now, let's get to the juicy stuff. Let's see what these caps can really do. Let's ask ourselves, what is the truth about a lobster trap? What is a single thing that we can say, that we can remember, that might help us later on?"

Noah tugged at his cosy and squinted as he had seen Little Mac do when confronted with a difficult question. Just then, as Mac was about to relent and offer some suggestions, Sir Barksalot saw a gull feather wafted by the breeze and chased it, and when it entered a lobster trap high in the stack he went after it, thrusting his head through the hole made for lobsters to enter and snapping up his first catch of the day. He would have come down then. It was in his mind to go straight to his boy and present him the feather and lick him and wag his tail in triumph. But his head stuck in the hole. Try as he might, he could not pull it out. He then in a panic jumped and jerked and contorted himself so that he upset the balance of the traps and the whole stack came crashing down.

Little Mac, who was winded and muddy and even a little dizzy from having accomplished the restacking single-handed, the traps being weighted and far too heavy for Noah to lift, could only look at his grandson and marvel.

Alvah Norris lowered her binoculars. "Well," she cackled, "He's successfully initiated his grandson into the society of idiots. What's next, I wonder? Will he send him out in his little boat to round the world single-handed?"

It had been a long winter, as usual, and now was at that point in its longevity that the ratio of brandy to tea had increased mightily in favor of the brandy. Alvah's bosom buddy Margie Ott was even sneaking sips straight from the bottle while Alvah used the binoculars. The effect was to tip her in the direction of sentimentality rather than ridicule. Not only to tip her, but to fairly overturn her. Her turn came for the binoculars and instead of seeing idiots she saw angels.

"Oh," she said, the tears blinding her and making her put the binoculars aside, "they'll do, I think. They look just like two precious little pots of tea. To keep one warm and settled when the world makes one feel cold and mad. I wish I had never said nothin' against him. Alvah, I have got to go home. It's you and me has been idiots.

In Spryfield, that was part and parcel of Halifax, Noah's mother Delilah drove slowly by the ramshackle duplex she was told that her husband was living in with his new partner. She drove by, and then she drove by again, both hoping to see him and dreading the possibility.