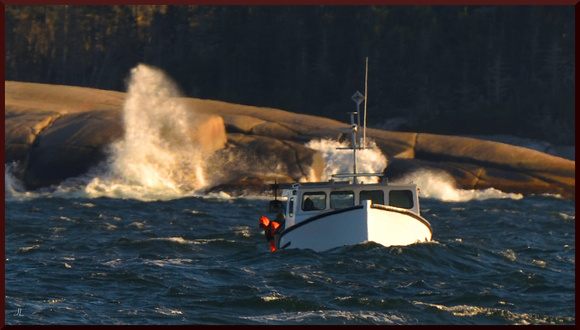 The house that had been dark and drowned erupted into life.

Lights came on in every room and both outside and inside, in a strangely mild February with no snow on the ground and no ice in the cove, villagers ate and drank and talked and laughed. Gatlin from the end of the lane, who often played guitar in the city and even abroad, had trotted out his Celtic repertoire and was holding forth in the big room that was both kitchen and dining room and sewing room for Big Bertha, who while she chatted sewed nonstop to make headway with a long backlog of orders. In the flooded basement a pump ran noisily and was checked at intervals by an industrious Little Mac, who moved from group to group with drinks and snacks and jokes and welcoming handshakes and hugs.

Little Mac had his memory back and intended to let the world know.

"Jeez, Mac, that's wunnerful," said Gillie Christian, whom Mac had particularly sought out and found on the back porch. "Does that mean I don't have to worry no more about you and your little rowboat out there?"

"Gillie," Little Mac replied ruefully, "I am so dreadful sorry to have been such a pain in the ass. You are definitely relieved of that duty."

"On t'other hand," Gillie said, "maybe I just oughta start chargin' you. You musta got rich somehow. Runnin' off to Cuber and Californ-i-a. Throwin' a big party and buyin' all this booze."

"I know but I got a favor to ask, see? We couldn't afford what we did, but we did anyway, 'cause Bertie thought we had to, and somehow it worked out. And while we was in California, Bertie's cousin Minnie, who really did get rich, you know..."

"Yah, I remember her, up and marryin' that Hollywood actor when they came and made that movie here. Didn't treat her too well, though, I heard."

"Well, I don't know. She's mighty well off now. He left her everything. And Bertie and her was mighty close when they was young. So she gimme some money to do somethin' for Bertie. And that's where you come in. I want to buy her a boat. One that's big enough for her. She dearly loves bein' out on the waves and she hadn't been able too much for a long time. Ever since I lost my job. But now I'm well and...and..."

"And you want me to find you that boat she deserves, eh?"

"And you're wonderin' about my brother Billy's boat, maybe."

Gillie held up a hand for silence and brought out his pipe from his coat and charged and lit it and took several thoughtful puffs. "Dead's dead, eh?" he said then. "But here's the thing. Two things, in fact. Now Bill, he weren't as bad as you, but he had got eccentric. He told Maddy, his wife, not to sell that boat to no one but to burn it right there on the slipway. He was afraid she'd get mistreated otherwise. You might even say he got jealous, toward the end there, even thinkin' of someone else treadin' her deck. And what the hell, why not oblige him? There's only one reason, o' course, and that's that Maddy needs the money. Still and all, she'll be hard to convince. She was that used to lettin' Billy always have his way. I might can turn the tide, but here's the second thing. She's my sister-in-law and she'll get a fair price, eh? I ain't a'goin' in there to steal nothin' for you."

"I wouldn't expect it," said Little Mac. "I know you'll ask what is right. And I'll pay that and add what is fair for your trouble too."

"She brought it out like she was buyin' groceries. But I got my own money too, Gillie. Plus I'll be goin' back to work. There's a shortage o' teachers. All I got to do is make my case and prove myself and I'll have a paycheck to draw on too."

"There's only a little as is really worth doin'. Now Bertie, she does whatever it takes to get that little done. So I reckon I can too. I've come this far, ain't I?"

"They say there's such a thing as wanderin' miracles."

Big Bertha didn't care much for Alvah Norris and Margie Ott. There was too much spite in the women. It was like in the cradle they got bit by a spider and never got treated since nobody knew. But they were neighbours and they had come to Mac's party and she was resolved not to slight them. So when Alvah made fun of Little Mac for not remembering to turn off the downspouts before leaving for Cuba, and Margie took it a step further by asking facetiously who put cisterns in their basements anyway unless they were looking for indoor swimming on the cheap, Bertha let pass six several retorts in her mind that would have served them right (such as, "Yes, having a husband can certainly be a challenge") and instead laughed along with them and afterward offered more of the bacon-wrapped scallops they had been wolfing down.

Mac sent Bertha to bed and did clean-up himself. And when all the bottles were in trash bags and paper cups and plates in the woodstove flaring up, he put his laptop back up on the kitchen counter and went back to contemplating photos of Billy Christian's Cape Islander, that had been a tough boat and a good boat and would soon be Big Bertha's boat, he meant to make sure.