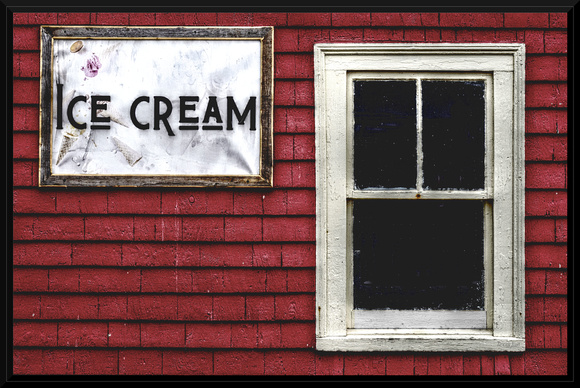 The Ice Cream Store
They went inside the ice cream store with nothing but fun on their minds, but the woman behind the counter was crying.
They were celebrating becoming a household. It was very unlikely, and they were still discussing how it would work, but at the moment all that mattered was the happiness they felt at having met up with what seemed like a wandering miracle. Farhead and Nearheart had just lost their house. Noah had just lost his mother. Minnie was all Noah had left and she was good as an honorary aunt but as lost as a mother as a newborn in a jungle. Cloud it was who was mothering them all. Intimate with Minnie, fearless with Noah, kind with Farhead and Nearheart as if they were orphans meant for her, Cloud it was who had spotted the store and had Minnie pull over.
And Cloud it was who insisted the store was still open in spite of the sign on the door that said closed, and Cloud who did not hesitate to trespass behind the counter and put her arm around the crying stranger at the antiquated register, the drawer of which was open and empty.
"They turned off the electricity and the ice cream all melted, and last night someone broke in and stole all the cash I had left in the register ... and that was all I had left anywhere!"
Bawling, the woman turned to Cloud and let her put her other arm around.
Cloud looked at the others while the woman cried into her bosom. Her eyes grew wide as she took them all in at once, and then even wider, as if she were looking through and beyond them. And then she smiled.
"Don't worry," she said to the woman. "It isn't a bad day. It's a good day. My friend Minnie here was looking for an ice cream store to buy, weren't you Min?"
Minnie's jaw dropped, but already, with Cloud's gaze searching her soul, words of agreement were on their way to her mouth.
"Right. Right. It couldn't be otherwise," she found herself saying. At the same time, she found herself thinking, "Right. An ice cream store in Nova Scotia. Where it's winter for most of the year."
And at absolutely the same time, she felt her heart melting. It was actually her idea that the woman come with them while they searched for somewhere else and some way else to celebrate. Another new door had opened, and again it was right under her feet, and again she was falling and again there was nowhere to land. She wondered what else love would bring. She was afraid to even try to imagine.
A dense fog had rolled in from the sea. The road in front of them vanished. She kept her eyes on where she thought it was going. She tried to remember to breathe.
15 April 2022
Texas Jim
Peggy's Cove, Nova Scotia
www.granitecoast.ca
Category:Architecture and Structures
Subcategory:Walls/Fences
Subcategory Detail:
Keywords:beauty, behind, canada, cove, cream, darkness, facade, frame, glass, ice, nova, of, paint, peeling, peggy's, ruin, saying, scotia, sign, store, the, window, window
Jim Lindsey