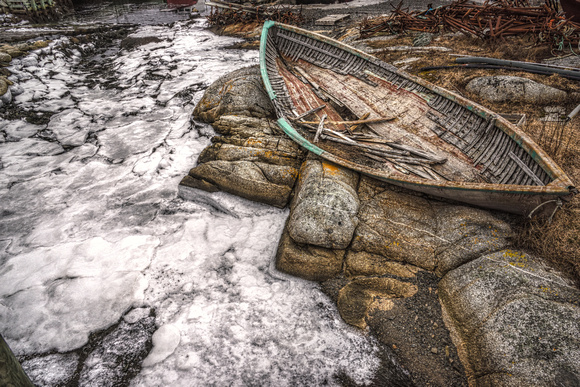 Nearheart and Her Sympathy for Almost Everything
Though her husband Farhead had the imagination that moved mountains and had brought him from Iran to Canada and safety and prosperity and the love of his life, Eileen (dubbed Nearheart through his great affection and sense of humor) had emotional powers that let her see things he could not. She saw when weakness took him that his home became unbearable. The rafters sagged, the walls closed in, the air took itself and its sustenance off and away. And then he would flee. Sometimes in the car, sometimes on foot. In Toronto, he had once in a breathless panic called a taxi. And he would not return until physical exhaustion left nothing of his imagination as prey for the weakness.
Now in rural Nova Scotia on the Atlantic coast, in a tiny community Eileen called Budfug when disappointment overwhelmed her, Farhead had lost the job that had enabled them to move and him to work remotely so they could live free of the pandemic dangers and restrictions of the big city. He had taken the car this time and he had not been back for days. Eileen, rather than chasing after him or reporting him missing, decided instead that she would emulate his behavior and through sympathy determine his location.
"Nearheart," she complained to her boots as she strapped on the crampons. "Dumbass is more like it." And away she went, jamming her spikes in the ice till her ankles got sore.
Mad as she was, she felt the magic working. By the time she got down to the harbour and plopped on a bench, her sympathy had got the upper hand. She felt, inside her layered clothing, that her sweat was Farhead's, that his fear was her fear, and that he was bound to appear. She was reeling him in with her love and he dared not resist.
What appeared, however, was a worn-out old boat. Abandoned on the granite shore, it called to her intimately, as if it were Farhead himself. Through her mind passed a whirlwind of stories of fishermen out on the sea. She felt herself seduced by raptures and bereavements. She even mourned for the boat, for its spirit that soon, when the hull fell completely to pieces, would vanish, would necessarily vanish. She felt a tear freeze on her cheek.
When she got home, Farhead was there.
"Do you know, do you know my dear Nearheart" he said, as he unstrapped her crampons and took off her boots, "that sometimes I get lost but I know you will find me?"
"What I know, you impossible person," she replied, "I don't think you will ever understand."
"Well, what now? I have ideas, lots of ideas, but they're like a graveyard of the stillborn."
She slapped him backhanded so hard that her wedding diamond tore a trail through his cheek.
"First we start," she said. "And that is where we start, okay?"
She held his head and licked the trace of blood away.
"And now I'll make dinner," she said.
"And now," he replied, solemn to the extreme, "I will check all the graves. Perhaps some were dug prematurely."
25 January 2022
Texas Jim
Peggy's Cove, Nova Scotia
www.granitecoast.ca
Category:Transportation
Subcategory:Boats
Subcategory Detail:
Keywords:Cove, Nova, Peggy's, Scotia, abandoned, boat, derelict, fishing, frozen, granite, ice, old, out, rowboat, shore, snow, winter, worn
Jim Lindsey