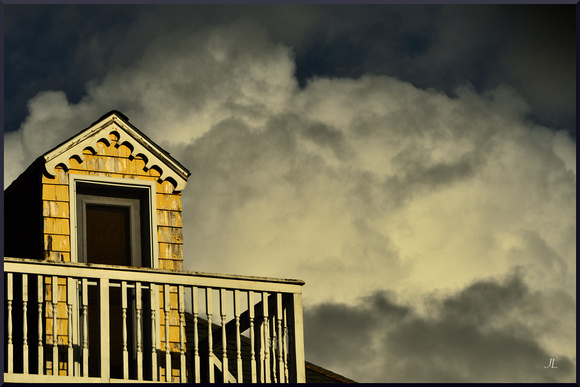 The Ghost in the Old B and B
"No, Barkie, look. Now stop barking and look! I'm tryin' to eddicate you."
Noah squatted and lifted his companion's jaw so the dog would be facing in the right direction, which was up at the second story of the old bed and breakfast at the end of the village, and particularly at the dormer there that had its own door, its own railed balcony and its own entrance and exit via the widow's walk that girded the long-vacant seaside resort.
"She had it made that way, see? Because why? Because she didn't want no company. Her friend had so broken her heart that anytime anyone got close, they stepped all over the pieces."
The boy's last statement seemed to get the dog's attention. It lifted its muzzle free of Noah's grasp and cocked its head
to one side and looked quizzically back and forth from its human source of joy to the residence in question.
"That's right," Noah said. "You know what it's like. Someone left you behind too."
A crow cawed at the two from the balcony railing, lifted off, fluttered in place as it eyed them, and then flew like an arrow straight down at them, sounding its battle cry as it came.
The crow had no intention of attacking them. It was just pleased to witness them flatten themselves on the ground as it swooped overhead so unbelievably close they could feel the swoosh of air from its wings.
Recovering, Noah put his arm around Sir Barksalot to reassure him. "See?" he said. "I told you. Haunted."
***
In only seconds, in the stiff northeast wind that rushed over the village, the crow shot up over the cross of the church, past the seaweedy rocks of the cove at low tide, and with perfect aim and timing dropped a bomb of its unneeded necessities on the truck of Little Mac, leaving a map on the windshield that would have to be cleaned before any driver could go anywhere.
Inside the cottage, because school had been cancelled and her latest job interview postponed, Little Mac and his daughter Delilah deliberated.
"I just thought you might have been out with him," said Delilah. "Often and often, when you're not substituting, you make it a point to be out with him."
"Now Sissy," said Little Mac, "I can't always be a'clutterin' up of the boy's experience. It's safe around here. You remember. Folks look after the children. And I have shown him around. He knows where not to go in the marshes, how close in all weathers you can get to the sea, and how not to cross the road. Other than that, my dear darlin', this is his time to get close to the magic. You know that. You can never get closer than when you're a kid."
"I know that," said Delilah. "I do, Daddy. But this village, it ain't like it was. Folks aren't here all the time anymore. Most work daytime hours in the city. Only Gilly fishes all the time, and he's like you. He's getting old. And old folks, well, their minds are apt to wander, just like yours does. Daddy, no one loves you more than me. But I can't count on you always. Not anymore. I'm sorry."
She went on to include, in her objection to her son's being unaccompanied, the very late winter storm that had been forecast and that already was almost upon them. "Look at the clouds, Daddy. They're boilin' up just like a witches' brew."
"Alright," said Little Mac, "I'll go and fetch him. But if you don't mind my asking, why don't you?"
"Because," said Delilah, "I have a bad feeling. Otherwise I would. You know I would."
***
"Witches and bitches, oh no!" Noah called as he skipped around the end of the road and down the hill toward home. "I don't know what it means but I know that you got to watch out, yessirree!"
Sir Barksalot skipped in time with him, almost, till the last mink remaining from the lot the MacPhersons had tried to farm years ago slipped out from under a rock and went darting away toward the water, which lured the dog from Noah's side.
Unheard in his exaltation, the car door opened so close alongside Noah thought he was hit in the head.
"Hello, son," said his father, his long absent father, like a ghost.
14 March 2018
Texas Jim
Prospect, Nova Scotia
www.granitecoast.ca
Category:Architecture and Structures
Subcategory:Buildings
Subcategory Detail:
Keywords:approaching, balcony, canada, clouds, door, dormer, dramatic, fading, nova, ominous, paint, peeling, prospect, railing, scotia, shingles, storm, white, window, wooden, yellow
Jim Lindsey