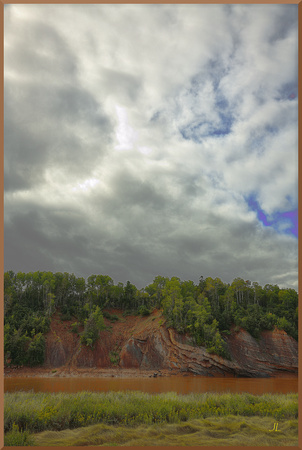 Episode 91. Little Mac's Memoirs of Now - Up the Lazy River

My daughter Delilah has suggested that my memoirs of now would have more authenticity if I wrote them in the present rather than the past tense. So, here goes.

Bertie is alive and we are dancing to our favourite song, Up a Lazy River. It's a very mellow number and the moves are easy. So I throw in a little move of my own and Bertie slaps my hand away because it is a public place. When we dance in our living room to the hi-fi, as we so often do, she doesn't slap my hand away no matter where I put it.

Our favourite line is "Throw away your troubles, dream a dream with me." And so we dance and also live for many years, in a dream of love within a dream of life. But now we cannot dance because the cold cold ground is swallowing her up.

I'm sorry. Let me extract myself. The empty hole that is the past cannot be filled with wrappers made of present tense. But the pull of that hole is tremendous. Sometimes I can no more resist it than if I were standing at the door of a high-flying plane and the door opened.

In the now that is really now, or at least that pretends with such authority, we are in two canoes. Delilah and my grandson Noah and Barkie his dog in the one and Cousin Minnie and me in the other. The river is indeed a lazy one and is even named the Meander. It isn't clear and I don't want it to be clear. I like the muddy water. It's like floating in hot chocolate, in a giant cup of Bertie's homemade hot chocolate. And our paddles are spoons stirring it, stirring up the sweetness in it so it's just soul-satisfying right.

I know I'm not the only one that thinks of someone else who isn't anywhere. Delilah thinks of her Sam. She has a dream where she is doing his face for the viewing again. She makes him up as a clown and he wakes up with a wicked laugh and proclaims it her fault. He wouldn't have sailed after dark and he wouldn't have drunk a whole bottle of rum and he wouldn't have gone overboard if she had taken him back.

She knows better but has the dream anyway and every time she wakes up in a sweat.

Cousin Minnie confides that she likes her husband's money more than she did him, and that she feels a little guilty when she realizes that. She imagines apologizing to him. She never imagines being able to do it with a straight face, because it really is a very tiny guilt, one you could hide in the eye of a needle, but she does think of him, though he is nowhere to be found.

Only Noah and his Barkie never wander from the now. They are so here it breaks my heart with tenderness. Noah paddles and Barkie snaps at the drops that are flung.

They love each other so. And one day not too far away his Barkie will be gone.