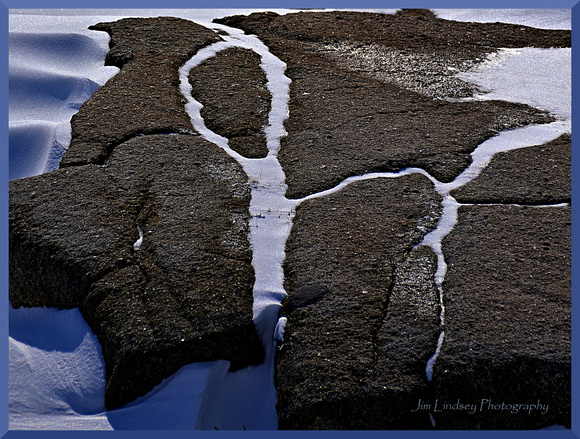 "Present yourself. Be present. Be a present. Surrender!" These words came to Jovina and she chanted them to the accelerated rhythm of her heart.

She had a rendezvous at Keyhole Rock, and she had looked up the word rendezvous not only for its meaning now but how it got its start, in french, and she had played upon that original meaning with an imagination as speeded-up as her heartbeat.

The rock, the rock, the Keyhole Rock! It was nowhere in summer, but in the winter when the snow filled its cracks, the shape of a keyhole appeared and bestowed a handsome distinction on the upheaved slab of granite. It had become, among her generation, a secret destination, a place you could meet when you didn't want grown-ups to know, because the grown-ups didn't call it that. They didn't call it anything. They didn't know.

Of course she was a grown-up now. Perhaps only barely but she didn't have her parents anymore and she did have their house and she had work when she could get herself to do it.

At the moment she felt she could do anything. And would, and would! The text had come late in the night and roused her from a semi-slumber in which she was neither really asleep nor really awake. Thinking she might be dreaming, she read the text over and over. She turned her phone off and on. She went to the bathroom and washed her face with cold water and pinched and slapped herself and jumped up and down and shouted.

Yes she was certainly awake and the text was for real and that guy from the Bishop and Shirley had noticed her. They were down at the docks, her and Donna Robichaux and Catalina Covington, getting high and watching them unload the lobsters, and Jovina had eyes for this one guy with faraway eyes. He wasn't particularly handsome, but he had this way of holding himself while he worked, as if the vats in his hands were almost weightless, and in his gaze she thought she saw the same distant lands that he must have been watching, that she thought they might go to together.

She heard them call him Sonny Boy, and while the other men chatted and laughed, he went about his business in complete silence. He's like me, she thought, like me inside. But we could be alone together. And so she had dreamed as the other girls chatted and laughed and got higher and higher as they sat in the car and kept smoking.

She thought he hadn't noticed but he had. Because the text was from him and he wanted to meet her. He wanted to rendezvous! That was the exact word he had used. At Keyhole Rock! To rendezvous!

So she went at that blue hour after sunset and she waited till her hands and feet were freezing and her mind blue as the darkening snow and then she laid the rose that she had bought for him inside the keyhole and she left.