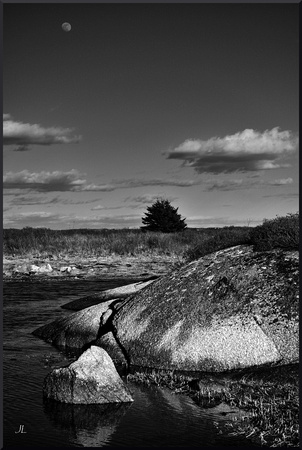 Moon Over the Salt Marsh

Sizewise, Delilah took after her father Little Mac rather than her mother Big Bertha, so it was his waders she borrowed to go wading in the salt marsh late one afternoon. She let out the suspenders to accommodate her chest, and then the fit was excellent.

"Why go alone?" said Big Bertha, who was busy ironing clothes for Little Mac to wear in his public appearances as a teacher. "Your father and Noah will be back soon. You could all go together. I'd go, but I've got a wedding gown to finish."

But alone was what Delilah wanted. Even the why of it she wanted for herself and no one else. The why of it was what was on her mind. She would have liked to share it with her mom, but it was not a why she thought her mom would understand. It was a why her mom would try to fix, and Delilah did not want it fixed.

She wanted to know more about it.

She did not wade far. Just away from the village. Just enough to let the suck and pull of the mud in the marsh make her work for a while and take the edge off the anxiety she felt cutting her out of the family picture. Because the anxiety kept her from knowing. It pulled her strings and kept her making human-like motions, but it also made her mind too jumpy to contain anything. She needed her mind to become like a bowl, a glass bowl in which her thoughts could swim like goldfish for her contemplation.

"Sam!" she called out to a tree in the mid-distance. And again "Sam!" to the clouds fleeing eastward. And finally "Sam!" to the moon, the early moon, the moon so high already though the sun still lingered in the west.

For Sam was the key word. Sam it was who left and whose departure undid everything. Love, livelihood, the future she had planned, they all came tumbling down.

Why did his absence make her want to be alone? That was the contemplation that the key word unlocked. Not if he begged would she take him back. Not if he bought her pearls or diamonds, which she could not imagine since he never even bought her flowers. Not if he could make her queen. Not if he was God and would give up creation for her.

"Oh!" she stomped her foot and sent the muddy water flying. "Oh, you, you ..." No, his name was not enough. Nor an expletive upon his name. The anger that leapt, that consumed, that challenged heaven, nothing so mild as a curse would appease it.

It took the moon to appease it. The moon in a sky with no stars. The early, early moon. That put a straw in her glass bowl and sipped her indecipherable inflammable intractable conceptualizations like lemonade.

She sat on a rock in the marsh and made the crispy sun-baked lichen crunch beneath her. She spread her arms wide as if petitioning the vagabond clouds to include her in their exodus toward the horizon. She envisioned her son and her father and mother around her as if she were a faltering campfire and they the vigilant stokers.

Only now the fire was not of anger anymore but just the warming fire of life. And gradually, as she sat there and the hours passed and the evening thickened and the chill deepened and the gulls took their disturbances elsewhere, she felt the merest hint inside her of an ease that defied explanation.