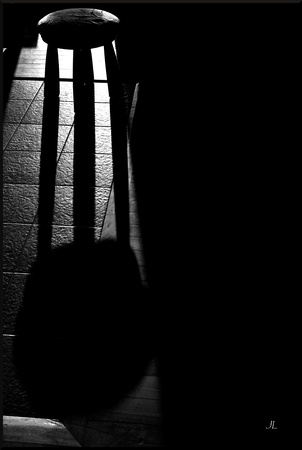 Red Rover and the Perfect Fire

The sun and sea had just parted so the light across the water made a path through the glass-panelled door and shining on the woodstove stool cast a long shadow.

Big Bertha was down early, for it was her day to make breakfast, but even earlier into the kitchen was her daughter Delilah.

Sitting on the woodstove stool, still in her pajamas, Delilah was building a fire in the stove. Bertha watched without interrupting as Delilah talked herself through the process.

"First you take the scoop and clear the ashes from the vent, so the air circulates as it should. Then you pat the ash flat to make a bed for the fire. Old newspaper twisted is your first bit of kindling after which you lay crosshatched the old cedar shingles, being sure to take the nails out. Nails go in this jar here, Missy. They can be re-used. Then three small logs on top, small so Mister Fire ain't crushed. He's got to breathe, you know, or he won't grow. Now light the paper with the match and quickly close the door to keep the smoke inside. Now lock the door so the draft from the chimney takes over. And there's your perfect fire, Red Rover!"

"You're word perfect," Bertha said, coming into the light. "That's just how your dad taught you."

Turning to her mother, Delilah wiped tears from her face. "I hope you don't mind," she said. "I couldn't sleep, and I was that restless I couldn't even lie in bed."

"Why would I mind?" said Big Bertha. "It was always your job when you lived here."

"Well, things change ... and Daddy didn't hug me even though he let us stay."

"Aw, sweetheart, he didn't mean nothing by it. He and Noah were playing, that's all. He was just all caught up in their game."

"I couldn't stand to lose him too. I went with Noah's dad. I know he didn't like that. And he was right. He was right. One morning I woke up alone and that was it. Now I'm a single mother. Like Dad said. Just like he said."

Bertha got out the eggs and the butter and bacon and bread and plugged in the hot water kettle and put two tea bags in the teapot. She didn't want to open up the floodgates of her daughter's tears by hugging her just then. She knew Delilah had recited the fire-building steps with that very purpose in mind, of not abandoning herself to her misery. So she went about her business as usual, though her arms ached with the restraint.

"He loves you," she said as she sliced off four pieces of bread. "He's had a hard time himself recently. You know that."

Delilah watched her fire gather headway through the glass door of the stove. "I did some research, Mama, on Dad's losing his memory and all. I read that sometimes people do recover. But it's just before they die. And this morning the little stool - where he always sat before he taught me how to make the fire - it had such a long shadow, and all I could think of was Daddy had died in the night."

She stopped at the foot of the stairs, took a deep breath, bade her own tears not to make waves, and ascended, shouting, "Rise and shine!"