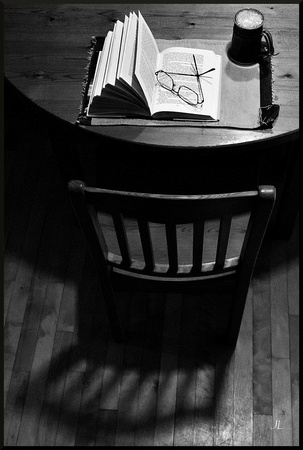 A Discussion of Shadows

Little Mac was on a philosophical binge. He got this way once or twice a year, usually in the winter. It was mostly when winter settled in solid with its snow and ice and wild north winds and made the diminutive man feel overmatched, as if he might be blown away or flash frozen. Then he would stay in and traipse around the house wearing a tea cozy that he called his thinking cap.

"Oh dear," said Big Bertha as he came into her sewing room. "It's that time of the year again. Now we'll have cold tea so you can have warm brains."

"Yes, but what about shadows?" said Little Mac.

"What about them?" said Big Bertha.

"Some folks say that shadows mean a loss of light. Now, I don't mean to denigrate, but that is shabby thinking pure and simple."

"Sit down," said Big Bertha. "You know your pacing makes me nervous. I could sew myself into this dress."

He came and sat on his wife's knee, at which she rolled her eyes and sighed and stopped sewing but smiled at him lovingly.

Big Bertha put her arms around him and kissed him on his bald spot. "You are a wonder," she said. "That you are. Now calm down and go finish fixing the washing machine. I know you can do it."

"I'd rather stay here," said her husband.