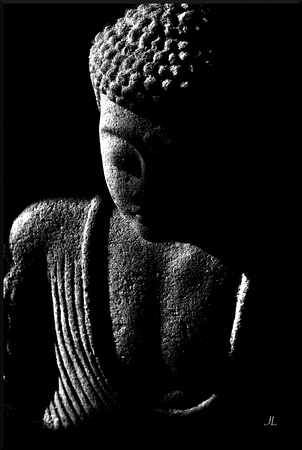 "Granddad," said Noah, "Why is that person wearing an acorn cap?"

The two were in sort of a nest on the couch. They had a patchwork quilt across their laps and one of Noah's grandmother Big Bertha's fringed shawls over their shoulders. In the grotto between them that their coverings formed was a box of tissues in its own nest of used wadded tissues and throat lozenge wrappers. Little Mac started to answer his grandson's question about the little statue on the coffee table but was interrupted by a coughing fit. After the processing of a few more tissues, Mac cleared his throat, wiped his rheumy eyes and attempted to focus on the issue at hand.

"Well," he said hoarsely and then stopped. Another lozenge was required. When the honied syrup had dripped down and stifled the overpowering ticklishness in his throat, he continued. "Well, that there fellow lived a long time ago. So he did. Long before there were cars or planes or phones or televisions. So long ago that they didn't have proper thinking caps like you and me, that can double as tea cozies, but had to use acorns. However, an acorn works well in a pinch, if your head is very small or your acorns very large. And I reckon his was no ordinary acorn anyhow, because he did a power of thinkin' with it. He thought so far along, in fact, he went past thinking altogether and discovered cool boredom. And that was a miracle to put other miracles smack dab in the shade. So people remember him. And I like to remember him too."

Noah had a question immediately but was choked off by his own coughing interlude. When he had added to the tissue and wrapper pile and could approach speech again, he said slowly and carefully, leaving enough space between words for the impulse to resume coughing to wander off in, "What is boredom, Granddad, and why is it a miracle?"

Little Mac's explanation of the phenomenon known as cool boredom would have taken only a few minutes had he been able to pursue it directly, but with detour after detour owing to the intercession of throat and chest upheavals, medication time-outs, lemony tea breaks and protracted rest periods, he spent the entire afternoon hashing things out. This was no problem for Noah, because his granddad's explanations were almost always stories in disguise, and Noah loved a story the same way he loved his canine companion Sir Barksalot, who lay asleep at his feet - with unassuming devotion.

"To sum up," said Little Mac, when the setting sun through the sliding glass doors had lengthened the shadows of the table legs under the little statue till they spanned the room and intersected at the opposite wall with a geometric magic. "To sum up, boredom is a long afternoon when you can't go outside 'cause you're sick but you can see the sun shining and the snow melting and the grass greening and the songbirds flitting around the feeder and the little crocuses poised to spread their purple flags and meanwhile your old Granddad is going on and on talking about who knows what and it's taking forever and it makes your whole being rise up in pure protest.

"So, in your own words, based upon my endless but nevertheless very likely inadequate verbal inventions, can you tell me the difference between hot and cool boredom?"

Noah extracted his feet from Sir Barksalot's paws and slipped out of their quilt and shawl cocoon. Going into the kitchen, he came back with their two thinking caps, Little Mac's yellow one (thereby leaving the fish-shaped ceramic teapot unswaddled) and his own blue one from the drawer with the dish-drying towels. Solemnly he placed the yellow one on Little Mac's head and the blue one on his own. Then he crawled back in beside his granddad and his dog.

"Hot boredom," he said then, "is when your whole being rises up and you think it's a problem. You stamp your feet or you cry or you go outside anyway and get even more sicker. Hot boredom is the sorrow of the world. Cool boredom is when you just let it rise up and that's fine. You just sit here anyway with your Granddad and you feel it rise up and you hear the birds sing and you see Spring a'sprouting all over and ... and ... and you just keep on sitting and you let the rising rise and go wherever. Go away or not it doesn't matter. Because you're fine just like you are, and your old Granddad ... your old Granddad's like a songbird too. No matter what he says."

An hour later, as the scene outside the glass began to disappear in darkness, Noah's mother Delilah came in to make dinner, trailed by Sir Barksalot who had gone to get her. Seeing her father and her son sitting quietly together in their yellow and blue tea cozies, doing nothing but suck on their lozenges, she looked at them with concern and said, "Are you two all right?"

Little Mac, smiling tiredly, turned to Noah and said, "Boy, you tell her."