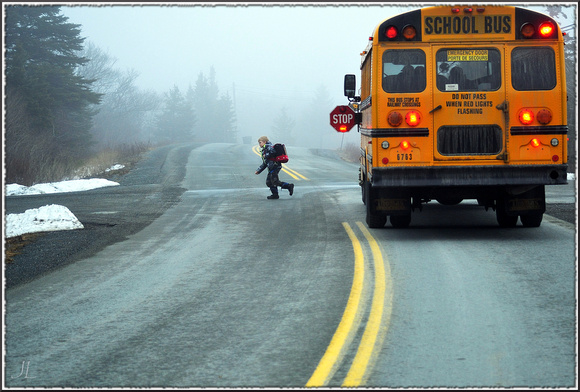 Where the Children Did Play

The bus stopped and Little Mac stopped behind it. The little boy with his backpack got out of the bus and hightailed it for home. The bus drove on but Little Mac did not. Not right away. Instead he pulled his old rattletrap of a truck over onto the shoulder and recorded in his notes to himself on his phone that in another country they were hunting children in the schools. And who were 'they'? Well, they were anybody who could get a gun and had a mind to. And who could get a gun? Well, anybody. And who was of a mind to?

Well, that was the question that stuck in Mac's craw and ended up not in his brain but in his heart where it exploded like a glass window on the other side of which was nothing but a raging darkness.

Before he drove on, he made another note with an ordered list reminding him that:

1. He too had been a child once, happy to be home from school.
2. The only enemy in his school had been occasional boredom.
3. He had also been a teacher who was happy to teach.
4. Even though his failing memory had cost him his teaching job, the school had allowed him to stay on as a janitor.
5. Even though his failing memory had also cost him his janitor's job, he had his memory back now.
6. Now he could teach again, but only as a substitute until the return of his memory was monitored and verified.

He then set an alarm that would remind him, only minutes after reaching home, of all these things. So he could say them all to Bertie without fail. "After all," he said, examining his wrinkled countenance in the rearview mirror, "the fog is right thick in the village. Might leak in through my hairy old ears."

Then he changed the alarm to not remind him of the murdered children.

They would be on his mind fog or no.