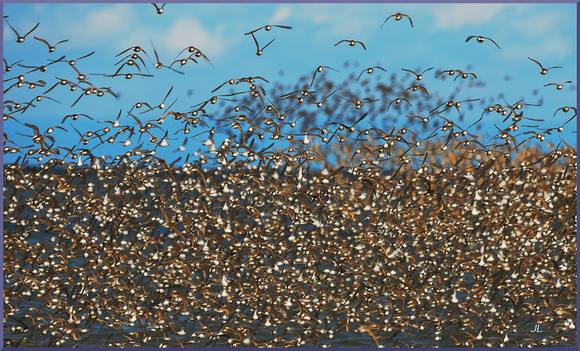 The Murmuration for web DSC_0454

Little Mac hadn't slept since Big Bertha had died. For four days he had wandered around like a madman. He crawled under the house and lay there in the dark on the damp rock with a flashlight that he kept pointed up at the floor overhead. He tried on Bertie's clothes, that were so large he was lost in them. He read through the entire shelf of her diaries and then started over and read them again, aloud this time. To Delilah his daughter and Noah his grandson and Cousin Minnie he apologized for being a ghost. And that was all he would say. When Delilah served him coffee, he put salt in it before gulping it down. When Cousin Minnie served him eggs, he smothered them in grape jelly and mashed them up till all was green then declared it was his daily vegetables and not to serve him any more till tomorrow.

On the fifth day he was sweeping the lawn with a broom when he finally collapsed. Sir Barksalot found him and Noah came to the barking and Delilah and Minnie between them carried the fallen man of the house upstairs to his bed. He seemed even smaller than usual. He was not much of a burden. It was almost like carrying a doll made of papier-mâché.

In his dream there was a fire. And it turned out to be Noah's Ark, his Bertie's boat, that was burning, there on the skidway by the house. And through the smoke he heard someone remark that Little Mac had set the fire so no one else would ever have the boat after the love of his life. And then he was in the thick of the smoke and it was obvious the fire had been set by himself because the fuel can was still in his hand and he was splashing the diesel around in the wheelhouse and out on the deck and even over his own clothes.

At that moment a cool hand came to rest on his shoulder and a cool and oh so familiar voice lovingly whispered, "Little darling, don't worry. I am with you always."

He woke to the call of a dove and immediately, in the tangle of sheets that he had thrashed around in through the night, whistled back in imitation. At first he did it simply to hear the bird call back again. But after the third interchange he perceived the call to be closer, and he perked up. The fifth time around the call seemed to come from just outside the open window. Then he was sure it was Bertha.

Getting up, he went to the window. There on the telephone wire just outside, barely out of arms reach, was the dove. Softly, softly, he whistled again. The dove looked his way. Seeing a human there however instead of another dove, the bird flew away in alarm.

Mac was brushing his teeth with shaving cream when a moth flew into his ear.

"It's not the body that matters anyway," he admitted, somewhat grudgingly.

Delilah and Cousin Minnie were at the kitchen table wondering what to do - about Mac and their own grief as well - when Mac burst into the room and declared that it was time for them to take a trip.

"We're off to put ourselves in the way of wandering miracles," he said. "Everyone into the car. There's no time to lose."

They went in Cousin Minnie's car because Mac's old battered pickup would not fit them all. Mac took the passenger side seat in the front because, he said, they needed to get lost, and no one was more experienced at getting lost than he, so he would navigate. In the back, Delilah could only roll her eyes and shrug when Noah asked where they were going. Sir Barksalot was quite content to stick his head out an open back window and exercise his vocal cords for all the world to hear.

They needed a general direction if they were to get well and truly lost, Mac informed them, so they headed for Wolfville in the valley, where the weather was pleasantly sunny and thoroughly unlike the dense fog that had been containing them in Prospect ever since Bertha passed. Mac thereupon shut his eyes and seemed to be asleep. After a while Cousin Minnie expressed her sincere desire to know how they were supposed to get lost if he wasn't going to say anything, because she knew the way to Wolfville perfectly well.

Using this process, their first, second and third wandering miracles were a laundromat, a landfill, and a large nondescript grey warehouse-looking sort of a building with a pack of dusty cruising size motorcycles out front and a sign that read, "NO TRESPASSERS. TRESPASSERS WILL BE SHOT FIRST AND QUESTIONED LATER".

But they persevered and on the fourth try turned into a little parking lot along the Bay of Fundy where there was a sand beach and the possibility seemed to exist of them at least having a little fun.

They went down the steps with Barksalot racing ahead to where the beach ended in a point. Across a narrow channel was another beach, this one of sand and small rock and apparently the end of someone's neglected farm judging by the fenceposts like old decayed crooked teeth and the sagging strand of rusted barbed that was all that was left of the fence. In response to the dog's immediate and voluble outpouring of emotion, a flock of birds rose up from this far beach, a flock of thousands that darted one way and then another, wheeling and turning in unison, showing now their pale undersides and now their dark tops, as if they were a flashing sign. All the little wings flapping together made a rustling, secretive undercurrent of sound, as of a lively conversation dimly heard from behind closed doors.

"You go swimming," Mac said. "I'm going to ask those two folks in their chairs over there what kind of birds those are."

Delilah and Minnie shook their heads at the swimming idea because they had no swimsuits or anything to change into or any towels, but Noah charged into the small waves that were lapping at the shore and Barksalot came dashing back to join him. The two women lay down on the sand.

"It seems harmless," agreed Cousin Minnie. "And it is a large day and the sun feels terrific."

So the women lay and toasted and the boy and dog bounded and splashed and Mac absorbed himself in conversation with the elderly couple in the chairs while the birds kept up their mesmerizing show even after Sir Barksalot had abandoned them.

"I think I understand now," Mac said when he had rejoined them.

"What your mother, what Bertie...what she was trying to tell me. What she is. Or can be for us now. At first there's a fright, you see, like when Barkie scared the birds. They're sandpipers, by the way. Or like when Bertie passed."

He paused and looked out at the birds, that were still whirling and turning as Sir Barksalot remained on the scene, splashing with Noah in the shallows.

"And there's a panic," he said when he could speak again. "A complete panic. And you can't tell...you can't tell how long it will last."

Again he choked up as tears came to his eyes.

"It's called a murmuration," he continued haltingly. "What the sandpipers do, how they come out of their panic. They take together to the air. They rise up in a body, as if with one mind, and create a confusion for whatever is frightening them. My new friends over there, they say they have seen hawks approach, with the intent of a quick meal, and be completely hypnotized and befuddled by this gyrating dance of the flock, and in the end fly away without ever attacking."

He breathed deep and again gathered himself. "It's like they're murmuring together, this sound that they make as the lot of them fly in formation so close. Flying into and out of each other and wheeling in circles and splitting apart only to rejoin like a hand folding in on itself. And the murmuring is like the sound of this unspoken command that directs the display that will keep them all safe."

"And Bertie has been murmuring to me," he said as he idly, hardly seeming to notice, traced her name in the sand. "But at first I was just in a panic. We have all been in a panic thinking we were without her, but perhaps me worst of all."

"But all the while...she's still part of the flock, she was saying, rise up, stick together, do the dance, there's no question, it will work."

And then he had got it all out and was exhausted and sat shaking his head and trembling as if he were chilled. So Delilah took his hand on the one side and Cousin Minnie on the other. And the three sat as if with one heart sighing while they listened to the murmur of the birds and what to them was just the playfulness of Noah and his dog.