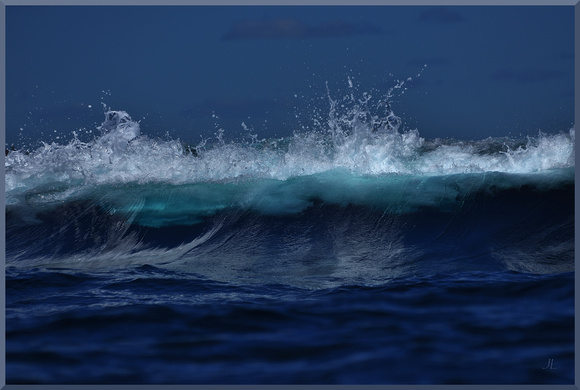 Episode 67. The Sea Is Our Witness

Noah's Ark left the harbour with a flag at her stern that bore the face of a young red-headed woman with three eyes, two in the usual positions and one in the middle of her forehead. The old Cape Islander had a broad back deck fit for holding lots of mackerel or lobster traps, but as she was retired she held only five deck chairs weighted down with family and a dog.

Little Mac sat positioned so he could address his wife Big Bertha in the wheelhouse, steering, and at the same time his audience in the other four chairs - his wife's cousin Minnie, his daughter Delilah, his grandson Noah and Noah's companion the mottled mongrel Sir Barksalot, who barked from time to time as if to show he understood but would not burden the conversation by interjecting as much as usual.

The flag flapped in a breeze of the boat's own making, as the air was otherwise nearly still and the sea wrinkled only with the slightest ripples, although rocking somewhat with a swell of occasionally attention-getting proportions.

"Of course I would never ever even dream of doing such a thing," Delilah was saying, "but the girl's husband, and her only family hereabouts, insisted. He said that it would help her navigate the underworld. He did! He said that! Otherwise, he said, she might be fooled into being afraid and making wrong choices. So I painted an eye on her forehead."

"And Daddy Mac," said Noah, as he was nodded to by his mother when she had concluded, "Daddy Mac knew that a third eye, by many people, is considered to be the eye of wisdom, that can tell what is real among the things the other two eyes see. Now, Daddy Mac, you go on, please. Cause that's all I remember. I'm sorry. I thought I had it all mesmerized."

Little Mac nodded and took over. "Still," he said, smiling and reaching over to tousle the boy's hair, "you get an A for memorization. Thank you, Noah. So, I asked our Bertie if she would run up a flag with the late girl's likeness, using a picture Delilah took with her phone, because of the auspiciousness of her experience coinciding with the great good fortune this growing family is experiencing. We are five now, with Cousin Minnie joining us. That itself is the greatest of the good fortune, although it is certainly worth an honourable mention that when Minnie heard we were building on to the cottage to accommodate her, she announced she would pay for it. Not only that, but she would also make available enough of her considerable fortune to enable Bertie to retire from her work as a seamstress, which chokes me up and forces me too to turn the baton over early. Surely you can continue, Bertie?"

Speaking rather loudly, because her head was turned to watch where they were going and they had to hear her through the door above the outboard motor noise, Bertie said, "All I got to say is, my eyesight is not what it was. And it is hard on me, sewing all day. Threading needles and stitching gives me headaches anymore. And it is way past time for me to get a rest. I thought I'd be sewing my own burial shroud. So it is damn honourable, thank you very much Cousin. And so I dedicate this cry-babiness to you and don't no one come in here."

"Well," said Cousin Minnie. "I guess that leaves it to me. And I don't know what to say. You took me in. My husband died. My home went up in flames. And all the money that Hollywood left me through him, it didn't matter. It didn't matter. If I hadn't left California and come back here, I don't know what I'd have done. I'm pretty sure it wouldn't have been pretty. So here's to family. Here's to Nova Scotia. Here's to love!"

At this they all picked up their glasses, that had been sitting on the deck, and drank. Except for Sir Barksalot, who lapped from his gold-plated bowl.

They toasted again, and Barkie kept on lapping, and Bertha stepped out of the wheelhouse to join them, and so they were caught by surprise when the swell revealed they were almost on top of the shoal off Morning Island by breaking with a roar and a sky-high upheaval of white water dead ahead.

When it was all over, and Noah was swabbing the deck clean of their spilled drinks, and Minnie was rubbing her throat that was sore from her having screamed so loud, and Sir Barksalot was lapping up what Noah hadn't swabbed, and Bertha was steering again, shaking her head and saying to herself as how she knew that shoal was there she must have taken a Little Mac forgetfulness pill, Little Mac refilled their glasses and the dog's bowl, each with the type of drink that accorded with their age and species, and again made a toast, this time to their flag, saying fervently and reverently, "As the sea is our witness, lord, lord, lord."