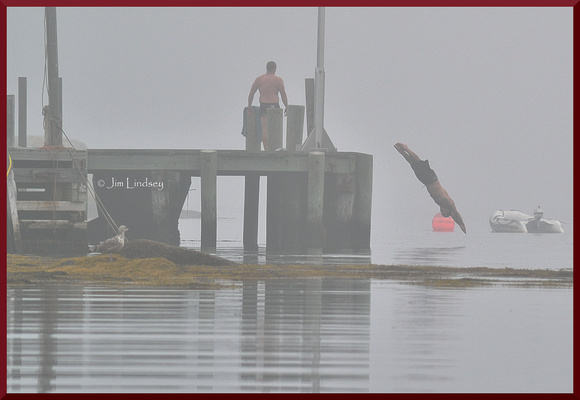 New Year's Dip at the Guvvy

"What's the fuss, Mac?" said Big Bertha. "I go in and you don't. You haven't since you were a boy. You always say you would, but that then someone would have to fish you out, and someone else would have to go to the trouble of burying you."

The couple were parked at the government wharf, known locally as the guvvie, where a little crowd of villagers had already gathered. The truck's engine was still on and the heater still going full blast. Big Bertha, in her swimsuit, was pulling her swimming cap over her ears. Little Mac, behind the wheel, was in his street clothes and his warmest winter coat and tuque.

"I have the padding," Bertha said. "You don't. You hold the towel. Just like always."

So Little Mac held the towel, and it was like old times till his wife jumped from the wharf into the grey forbidding sea. Then he panicked. The enormous splash and her instantaneous disappearance this time were too much. She bobbed to the surface momentarily, grinning and roaring with the shock of the freezing water, but already Little Mac had leaped in after her.

He was still shivering when she tucked him in a half an hour later back at their house on Cove Road.

"Whatever in the world got into you?" she said, smiling down at him. "Coming in after me like that. Well, you were half right."

"We did have to fish you out, but Dr. Crocker was there. He said we don't need to trouble with burying you just yet. He said you'll be just fine."

She was thinking of words to assure him, of a way to express her immense affection for him and appreciation of what he had done, leavened of course with a modicum of scolding for his absolutely absurd foolishness, when he closed his eyes and fell asleep.

"You will," she said to herself later, back downstairs and brewing up a cup of tea and getting out the brandy to enliven it with. "You'll be fine, God love you. And if He loves you half as much as I do, you always will be."