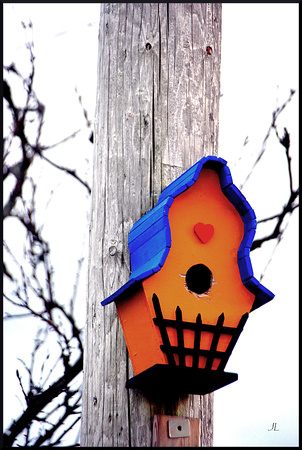 Bird House For Her Birthday
Little Mac was happy with himself. He had had an idea and he had carried it out. It was not so easy for him to use his tools anymore but he had undertaken the project carefully and proceeded slowly and had managed to keep it secret from Big Bertha for all the months it took him to finish. And he had delivered as planned. On her birthday, he had made the coffee and put her warmest robe around her and led her somewhat still in her morning befuddlement out to the dock to their chairs there. And he had revelled in her discomfiture.
"What in the world has gotten into you?" she said. "It's December. In high summer I have to drag you out here for coffee in the morning, Mr. It's-Too-Early-It's-Too-Cold. And here you are grinning like the Cheshire cat and it early and cold enough to make even Newfie me think twice!"
"Drink your coffee," he said. "Look at the light on the water. Look at the breeze making catspaws. All the things you love. Even though you're a million years old today. Then ask me."
She finished her coffee. It took her a while because she did what he recommended and became totally absorbed in her enjoyment of early morning out in the fresh sea-salty air out by the glittering and wide wide open north Atlantic. By the time her cup was drained she had forgotten her question. Of course he reminded her because that was all he could think of.
Big Bertha was so pleased she cried. And only for the very briefest of moments did it occur to her to harangue him for having put the birdhouse on a telephone pole that any self-respecting cat could crawl up.
She would make a cat-stopping collar for the pole herself. And if he ever remarked it, she would allow herself to kid him a little for having forgotten that of course he had made it.
17 December 2017
Texas Jim
Prospect, Nova Scotia
www.granitecoast.ca
Category:Architecture and Structures
Subcategory:Buildings
Subcategory Detail:
Keywords:Canada, Nova, Prospect, Scotia, birdhouse, branches, colorful, heart, leafless, pole, power, sky, telephone, trees, white, winter
Jim Lindsey