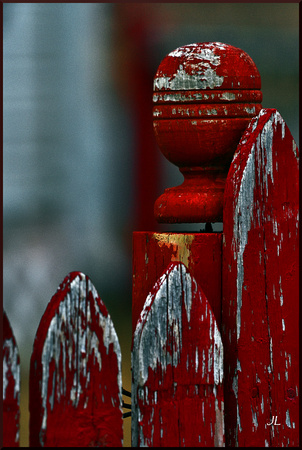 Fence Post Finial That Once Was All Red for web DSC_8795

The Nothing Doing Game
Noah and Sir Barksalot and Big Bertha had been for a walk to the sea cliffs just outside the village and were on their way back. Big Bertha had fallen behind as she was not so prone to run as her little grandson and his excitable dog. She called out for them to wait. They were getting close to the paved road at the bottom of the hill where there might be traffic.
She caught up at the one remaining section of fence by Hatty Callahan's old house. "Wait," she said as she saw Noah preparing to dash ahead again. "You'll give your old granny a heart attack."
"How will we do that?" said Noah.
"Listen," she said, breathing hard. "I'll give you a choice. Either you can stand and listen while I get an explanation all worked out, or we can play a game. I have to warn you, you may have to listen for a while, because it isn't something easy to explain, and even if you understand it in the end, it won't have been much fun in the meantime. That's how it is with old folks and their physical complaints. I recommend the game."
"I like games," said Noah. "Granddad and I play lots of games."
Sir Barksalot justified his name by not only prancing around Noah and tugging at his trouser leg with his teeth but also loudly vocalizing that he was for dashing ahead again no matter what.
"Well, now, pick Barkie up so he'll calm down and we'll play. If you like your Granddad's games, you should like this one. It's one of his favourites. He calls it the Nothing Doing game."
***
"He got it better and quicker than I ever did," Bertha said to Little Mac that night in bed. They were both propped up on pillows and had been reading by the lights of the little lamps on their bedside tables when Bertha recalled that part of her day with Noah and Sir Barksalot and wanted to share it. Mac was reading still with his book open very close to his eyes since he could not find his glasses, but he nodded and said, "Mhm," enough at the right times that Bertha understood he was listening too, at least after his fashion, and that was enough for her since mainly she was reminiscing and not looking to impart information particularly.
"So I says, 'Name something', and he names Hattie's fence. 'Nothin' doin'!' says I. 'Where's the fence in the fence?' And I commence to break it down for him. And he can see they're not the same anymore, the fallen part and the part still standing. Are they two fences then? No, they're parts of the same fence. So then we get into parts. If you take this part off, is it the fence or is what's left the fence? We proceed bit by bit, stake by stake, post by post, even down to the paint flakin' off. Finally all we got left is the finial, and it half unscrewed right in front of his eyes. 'Well,' says I, 'is it a fence or a finial?' And doesn't he just get it! And doesn't he just, proud as a banty cockle-doodle-doo, tell me it ain't neither, not even a finial, 'cause you could split the finial with a hatchet and then which part would be the finial! Oh, we laughed and laughed, and Sir Barkie barked and barked! And him just six years old!"
Little Mac let his book collapse onto his chest. "I like that," he said sleepily, closing his eyes. "And him just six years old. You know, Bertie, I was teachin' history today, about the battle of the Waterloo. And suddenly it happened like it did before, like the floor fell out from under. Who was fightin', what the war was all about, who won, I didn't know. I didn't know anymore. But I remembered nothin' doin'! Must ha' been that very moment you and Noah were playin' the game. And I laughed too. Just to myself, you know. 'Cause it was all like a dream, just like the game points out. So we dreamt out the period with them workin' up papers on who was fightin', what the war was all about, and who won."
His voice slowed and softened. "It was brilliant. Nothin' doin'. You know, Bertie, we have got to play that game more often. And you know what else? In my next life, I am goin' to be a bird. Enough of this here bein' like a fish. I need to fly ... high."
And then all she could hear was his soft little snore, that was like the sound the drafty window made behind his head, that was something she wished she could bottle and get drunk on when times got too hard.
***
In the backyard was a hemlock Little Mac had dug out of the woods up the road and brought back and replanted. Over the years it had grown from somewhat less than his height to several times his height, till on the ridge of the berm between their house and the neighbour's, it stood as tall as any in that village of shallow soil and granite never much farther down than a yardstick. Drooping down, the lower branches made a sort of shadowy cavern underneath that Noah liked to retreat to when he wanted to be by himself.
He was there the next day with Sir Barkie in his lap and his arms around the dog and the trunk of the hemlock behind him like a chair back.
"And so this is like a dream too," Noah whispered in Barkie's ear. "And we might just wake up anytime. So I want you to know that I love you, in case you don't wake up with me."
He held the dog close, and he felt both sad and happy as his tears flowed.