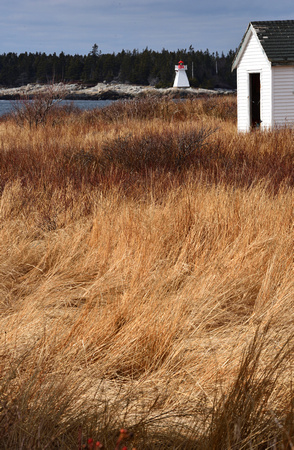 More Light, More Light
Minnie and Cloud waded through the marshy patches that the tall grass disguised and shoved aside the bristly springy brush and arrived at last, huffing and puffing and sporting several scratches, at the view that Cloud had advertised.
"There!" she said, lifting and spreading her hands. "Ain't it grand!"
Minnie was not looking out at the view but instead checking herself, behind her ears, inside her shirt under her arms, and down her pants between her legs.
"It's tick season, that's what it is," she replied. "I signed up to give you some companionship, not be a human sacrifice. And now I'm all sweaty too. And my feet are all wet. The water went over my boots."
"If it was easy to get to, everybody would do it," Cloud said. "And trample and trash and let their dogs poop all over. Look up, for goodness sake. Look up and see the light!"
Minnie looked. And stretched her eyes and made a face. "A lighthouse? Again?"
"And again and again and again."
"I don't know. I'm risking getting Lyme disease and you've got lighthouse fever. And this one, this one's facing the land, for all love. What sort of impossible ship is it warning and why? That there's water ahead? Gee whiz, Cloud!"
"There never can be too much light, my dear Min. Don't you know that?"
Minnie looked at her searchingly, her previous investigation abandoned in mid-probe. "Am I your dear?" she said.
Cloud took her hand. "When Goethe was dying, the last thing he wanted was more light. And it's all that I want now already. So brighten up, buttercup, and we will see what we will see."
Minnie blushed and tried to pull away.
"What's the matter?" said Cloud. "You can't like another woman?"
"No," Minnie said. "It's not that. It's...that's the hand that I had down my pants."
Cloud burst out laughing, grabbed her hand again and pulled her forward.
"Come on," she said. "There's a rock with our name on it down on the shore. We can sit and be out of the wind."
"You don't mind?" Minnie said.
"Did you find any ticks?" replied Cloud. Minnie nodded no. "Well, okay. You remember the wine? Good!"
They toasted on the big flat rock that was warm in the sun and nicely sheltered.
"Mehr licht!" Cloud shouted out. "Mehr licht!"
And they drank to the pint-sized lighthouse whose beam faced the shore.
13 March 2020
Texas Jim
Prospect, Nova Scotia
granitecoast.ca
Category:Scenic
Subcategory:Oceans
Subcategory Detail:
Keywords:atlantic, autumnal, brush, canada, coast, colors, distance, field, granite, grass, grass, island, lighthouse, long, meadow, north, nova, ocean, rocks, rocky, scotia, sea, shed, shore, tall, underbrush
Jim Lindsey