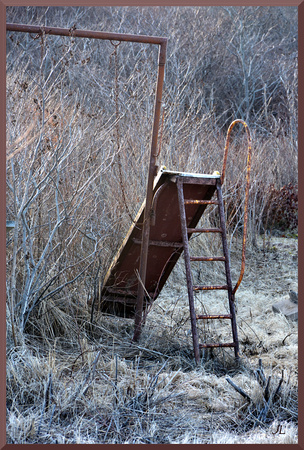 Where Childhood Was Lost

So they mounted a grand expedition.

Big Bertha was in charge of the picnic, Little Mac of the truck. She filled the thermoses with soup and tea. He aired the tires and tinkered with the carburetor. Hot food would lift their spirits. Not breaking down would keep the lift in place.

"Not Peggy's Cove. That lighthouse is for tourists. We're adventurers."

"That's right. And connoisseurs. We love a lighthouse. They're our bag."

It was twenty miles driving and one walking. They could have parked at the gate and made the walking much less, but they needed the workout. Her husband needed a thorough airing and she needed to send gravity a message loud and clear. She would not be intimidated. Her ankles might ache and her knees might give way, but she would go where she wanted. For now anyway. For a little while longer.

They sang the whole way in the truck. They were singing as they walked too, flagging the frosty air with the warmth of their breath, till they passed by the swing and the slide that the thicket was swallowing and Little Mac stopped. He stopped singing and he stopped walking too. Bertha wondered if he had stopped breathing, he became so still.

He unshouldered his backpack and went and stood next to the slide's rusty ladder and touched it tentatively with one gloved hand.

"Mac, are you all right? Say something. Is it a ghost you're after seeing? You're scaring me the way you look. Are you having a heart attack?"

Big Bertha acquiesced. What spellbound him on the spot was not as immediately evident to her, but it was not long in coming. Like a rug without backing on a slippery floor, time began to bunch up. Her breath quickened. It was shocking. This was indeed it.

"Yes," she said, "Yes, you're right. We were children. It all happened so fast. And this, this is a doorway between now and then."

Big Bertha felt faint. To her it seemed as if she had never known anything. But to say so to Mac would be sacrilege. He depended on her.

She got out the blanket and made him sit on that and not the cold, cold ground. That was her sole concession to her role as his protector. Otherwise she gave in to the spell. They picnicked in silence and went home without ever reaching the lighthouse. They had been there where childhood was lost. That was much more important. She would always remember and only forget when remembering too had been lost and there were only these doorways like slaps in the face.