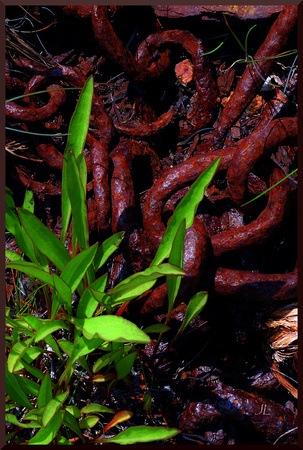 Big Bertha found her daughter Delilah sitting out on Mending Rock looking down at what seemed to be her feet.

"Are you sad again because of Sam?" Big Bertha said.

"If you're relieved," said her mother, "why are you looking down?"

"I've been contemplating this old chain. And something Daddy Mac told me, well, it's been coming alive."

Big Bertha would have sat down by Delilah. It was a lovely sunny day with the breeze off the ocean fresh and refreshing and the round dome of Mending Rock radiating warmth. But sitting down where there was no chair was a thing she could no longer do. She was too big and her getting up muscles were too tired. So she stood behind her daughter and tousled her hair, fondly, and then adjusted her stance just enough that her shadow would not cover what Delilah was looking at.

"It's so nice to be able to walk out whenever I feel like it," said Big Bertha. "My sewing machine was both an anchor and a chain for me. It was a still point in my world where I could relax and reflect. At the same time, I had to work. And it got to where it made my eyes hurt so bad. Your father at least had the freedom to go teach or wander. I just got up and went downstairs and sat down and that was where I stayed all day. But now your Aunt Minnie's here. And there will never not be money in the bank again."

Delilah put an arm around her mother's big legs that were like the trunks of the stand of pines growing next to the rock, across from where Gillie Christian parked his truck when he was out lobstering.

"Daddy brought me here when I was small and sat me down and told me this was where the fishermen used to sit and have a pipe together while they mended their nets. He said there was a lot of wisdom here that soaked into the rocks. He said it was a good place to come and consider."

"Well, this chain," Delilah said, smiling up at her lovestruck progenitor. "Once it held things. Once a boat would have stay where it was put till someone came and freed it from the chain. And now it's green and growing here. The chain is nothing but a shadow of itself. It's alive here. Green and alive. Free to follow the sun."

"I thought it made me safe, that chain," said her daughter.

"We were already safe," said her mother.