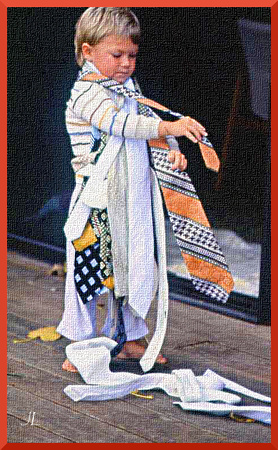 Fixing a Hole in the Ocean
Little Mac was so full of good news it was all he could think of. It was so good, so very nearly unbearable, that he couldn't wait to get rid of it by telling Big Bertha. So he didn't turn the truck around when he parked in the driveway, and he didn't take with him even one sack of the groceries. He barely remembered to take the key from the ignition before making a beeline for the back porch and the door there that was closest to Bertie's sewing room.
There were greater tidings than his own in the offing, however, and as he turned the corner to the porch he was greeted, after a fashion, by the bearer of them.
On the porch, just outside the glass doors, stood his grandson Noah, draped in an assortment of his grandfather's neckties, absorbed in his own vision of sartorial splendour.
Little Mac's initial vision was quite different. It was as if he had died without himself knowing it, and his clothes been rebranded as playthings.
***
Inside, Big Bertha listened on to her daughter Delilah's lament, meanwhile continuing the stitching of the bodice she was fashioning.
"Mother, I'm forty years old," wailed Delilah. "Grown up as I will ever get and still can't make it on my own!"
"You have family," Big Bertha said patiently. "And you don't have a husband."
"And not likely to find me another. I'll just be a burden. Best off for everyone would be just take me in your boat and dump me somewhere far far out."
"Stop pacing. It's hard enough with these old eyes just to see what I'm doing. You distract me and I'll have it all to do over again."
"Oh Lord!" cried Delilah, stopping by the glass doors. "Noah's got out with his granddaddy's neckties. They're all over the porch. And there's Daddy!"
"Come sit down," said Bertha. "They'll be fine. Let's you and me talk over some details, and then we'll go consult with the men."
***
The men, such as they were, were now both sitting on the porch. Half the ties now adorned Little Mac. Both had ties fastened bandanna-like around their foreheads. They were whooping and whirling other ties in the air.
"You go that way!" cried Little Mac. "Cut 'em off at the pass! I'll stay here and box 'em in from this end!"
"Yee ha!" Noah hollered back, meanwhile urging on his imaginary steed with wild flourishes of the tie in his fist.
With the sliding of the glass door, the adventure vanished. The two women stepped out. The two men stood up. The two women looked down on their shorter counterparts with affection. The two men smiled from amidst their neckties.
Delilah's look changed to one of anxiety as she addressed Little Mac. "Daddy," she said, wringing her hands, "do you think ... would you mind ... is it okay if me and Noah come and stay with you and Mama for awhile? I'm having trouble making ends meet. We wouldn't be any trouble, and I'll help out all I can. I'm sorry, Daddy. I am doing my best, but it's just not enough."
Little Mac stared at his daughter, at the tears welling freshly in her reddened eyes and trickling down into the dark pouches beneath. "I'm not dead, little darlin'," he said. "It was all just a rumour." Then he leaned over and whispered in his grandson's ear.
Noah went to his mom and had her lift him up, whereupon he fit her with a necktie bandanna, after which he did the same for his grandmother.
"There," he said, reviewing his handiwork, "you are now honor-hairy engineers, and we are going to fix a hole in the ocean. Granddad says it's better to let the ocean do the work. But he's willing to consider your ideas too."
***
In bed that night, after they had turned the lights out and were spooning as they always did prior to dropping off to sleep, Bertha whispered, "You are the perfect gentleman."
"Oh," said Little Mac, "I knew it was a done deal."
"She'll come round. She knows her daddy loves her."
"Bertie, one way or the other, it's all right," said Little Mac.
"And what was your good news, my dear?"
"My good news? Oh, my good news is the ocean. All the rest is circumstance. We can start off the morning with that, when we're all at the breakfast table again. That and some eggs, and it will be the four of us. And that will be even better than cowboys and indians, eh?"
When she could hear his soft snoring, Bertha got up to go check on Delilah and Noah in the guest room. She knew the good news. The school had called. They wanted Mac back as a regular teacher. And when she had regarded her sleeping daughter and grandson a while, she went and poured herself a shot glass full of brandy, slipped out to the dock with her robe clutched around her, saluted the ocean, downed the brandy, and threw the glass into the moonlit cove.
23 February 2018
Texas Jim
Prospect, Nova Scotia
www.granitecoast.ca
Category:People
Subcategory:Kids
Subcategory Detail:
Keywords:boy, child, dress, dress-up, little, neckties, playing, ties, up
Jim Lindsey