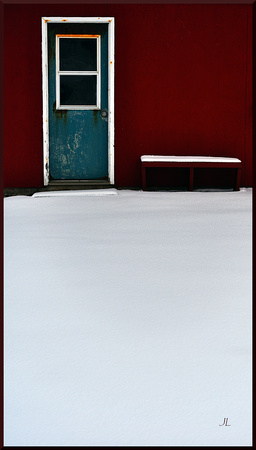 Snow Angels and Snow Birds and the Hereafter

Little Mac made a straight path down the lane while Noah made a series of paths, running past his grandfather, circling him while making buzzing airplane sounds and angling his arms like wings, sliding, skidding, diving into the drifts and throwing snow into the air while rolling in it and proclaiming himself the world's one and only human snow blower. "Step right this way!"

Little Mac gave his grandson free rein, delighting in his high spirits and even cheering him on, till as they were passing Bundy McEachern's place Noah shouted, "And now for a genuine snow angel!" and raced for Bundy's unmarked yard to carry out his intent.

Little Mac was not one for running. In his opinion, anywhere you went was all right, so why hurry to get anywhere else? Nevertheless, before Noah could plop into Bundy's virginal layout, Mac ran and caught his grandson and heaved him up high and held him with his little legs still churning.

"But why, Granddad? I wanna flap my angel wings."

"Well, let's consider," said Little Mac. "Let's play a guessing game. Okay? Now, this is Bundy McEachern's house, and there's his door. And between us and that door, there's only snow. Not snow with any tracks in it. Just snow. The question is, why ain't there any tracks to Mister McEachern's door?"

"Oh, Granddad," said Noah, "I don't know. How would I know a thing like that? I don't even know Mister Cracker."

"True," said Little Mac, "you don't. So you know what? I'm gonna give you some possibilities, and we'll see if we can pick the right one together, you and me. Okay? Okay. First possibility, Mr. Cracker is still in his house. He might be looking out at you and me through the window right now. So that's why there's no tracks."

Noah crinkled his eyebrows the way he knew grown-ups did when they were being thoughtful. "Well," he said. "He ought to come out. It's a beautiful day. We could all make snow angels together. His wife could come too."

"That's an excellent answer," said Granddaddy Mac. "I happen to know that he is not in his house, however. Second possibility, Mr. Cracker is a snowbird. A snowbird is a guy or gal that won't stay where they live when winter comes. They can't stand snow at all. So they make just like migrating birds and fly south on airplanes and stay in Florida and eat oranges till the snow melts."

Feeling overmatched yet being thoroughly game by nature, Noah now pulled out his ultimate grown-up impersonation and squished his lips up all funny and said, "He's just crazy if he don't know you can get oranges right here in Oga Skoba."

"The truth is certainly at your command," Mac replied. "Proud of you, Noah. You can certainly get oranges right here in Nova Scotia. But that ain't the answer neither. The right answer is - and I won't keep you waitin' 'cause I know we got more games to play and it's already late in the afternoon - the right answer is that Mr. Cracker, he ain't nowhere anymore. He's done what we call dying or passing on. His body got put in the ground and his spirit ... well, a spirit don't make tracks. At least not any we can see. He's free as a bird now. Free as an angel. He was a good neighbour. And he won't be making tracks from that door anymore. And Mrs. Cracker, well, she don't come out because she's sad. So very sad her mister's gone."

Noah had no further look to offer up and was glad that his granddad seemed satisfied. As for sadness, he knew about that. And he knew what to do. He marched right to that door that no one thought was fit to use and knocked and knocked till Mrs. Cracker came and said then, "Now you listen, Mrs. Cracker. Now your hubbin is an angel, you ain't got to be sad. You got to make an angel too, that's what. Why don't you come on out and we'll make angels in the snow, you and me and my granddaddy, all together. You ain't got to be sad."

He was still licking cookie crumbs from his lips when he got back to Little Mac. "There," he said. "There's tracks there now. And I am tired. Mrs. Cracker, she don't want to come out, but I think she is all right. Can we go home? I'm all wore out."

"We sure can," said Little Mac, taking his grandson by the hand and looking at him as if he were someone he could never possibly have met before, especially as a grown-up. "We sure can, little angel."