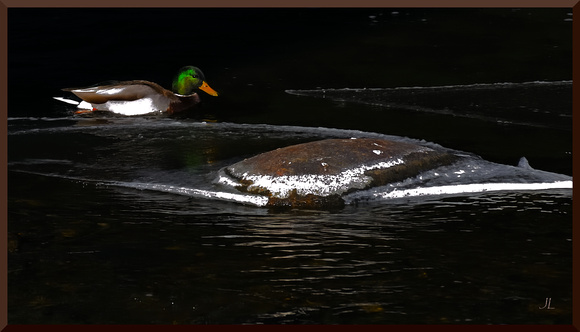 Episode 95. Little Mac's Memoirs of Now - Cold Duck Time
I picked a path through the woods. Not any path. There were tracks in the snow. They led down to a river. The teacher was there at the bank of the river with an attendant at his side. The attendant, dressed in a khaki uniform with the pants tucked into black military boots and a dark sweater with a dark beret from which her blonde hair escaped in a gleaming cascade, was standing with her hands clasped behind her back. The teacher sat in a folding chair with his brown hands clasped in his lap, a burgundy wool cap pulled down over his ears, burgundy down coat zipped up to his chin, burgundy skirt hanging down around him in the snow. The two were quiet and still as statues, gazing into the river toward a duck that was swimming along among patches of ice.
"It's cold duck time, Daddy Mac," the teacher said without turning. "Why are you still here? It must be freezing in your tent. Everyone else has gone home, including your daughter and grandson and your cousin-in-law. The storm has ended our indian summer and the program. There will be no more talks."
As a soldier I fought in the winter. I was used to doing what had to be done, weather notwithstanding, and I told him so, adding "Sir" at the end because, without asking for it, he commanded respect.
"And what is it that has to be done?" he inquired. He has a voice that warms my heart, though it is high like ice cubes tinkling in a crystal glass and sometimes its meaning escapes me.
I said there were things I still had to find out. For one, the meaning of his name. It was my understanding that names in Tibetan had to do with a person's significance. What was "Gesso" about?
"That is only a name I've assumed. It has nothing to do with Tibetan. You coat a canvas with gesso to prepare it for painting. And that is my job. My students are like a blank canvas. I have to prepare them so the meditation takes. So they can realize who they truly are. I am just a beginning. But without me, you have no idea. You could not make a proper painting of yourself."
"What else? What else must you find out?"
I am afraid. Without my Bertie, bless her soul, what will I do when I forget again? Which I feel could begin any day. Who will remind me where the colours are, and how to wield a brush? What happens when the day arrives when I am back to blank for good?
What happens when it's cold duck time for me?
"You were the smallest person at the program," said Gesso. "Smaller even than me. And yet you have a broken heart as big as space. How can that be?"
Sending the attendant away for another chair, he invited me to sit with him and watch the duck. The attendant was some time in returning. In the meantime, the morning shadows shortened. The duck clambered awkwardly up on a thin sheet of ice. It was a drake, and was shortly joined by a hen that took up its place on a flat rock by the ice sheet and tucked its head in as if meaning to sleep. Another drake joined them but stayed in the water, swimming in place in the current, eyeing the hen and the other drake alternately as if trying to make up its mind about something.
In the meantime we were quiet. I could hear, in the woods behind us, clumps of snow falling as the sun loosened their hold on the branches. The vapour of our breaths joined the clouds of vapour rising from the river and the snowy slope beyond.
When I was finally seated, Gesso finally turned and looked at me. There was a depth in his eyes behind which I could see no one. It was like looking into a starry sky at night. And yet there was a comfort there that I could feel as surely as if he had taken my hand.
"You see?" he said. "The ducks do what they do, no matter what. Because they are so thoroughly ducks. As you are thoroughly yourself. You see that now? You are already painted, and yet already blank at the same time. There is nothing to fear. And when the fear comes, you will not be available."
Now he actually did touch me, on the back of my bare freezing hand. He tapped me with one finger as if pressing a sensitive switch.
"There," he said. "You have known all along. And now there is something you will not forget. Because you will keep me in mind. And you will do the meditation. And one drake, no matter what time it is, will have the hen. Now run along. You are not dressed for this, and I have other things to do."
I went back to my tent and I put on more clothes and at length I stopped shivering. Then I packed and I got in my truck. The wheels spun a bit as I started away.
I do not know where I am going. I will call and let Delilah know that I have hit the road. I have no worries there. She has her mother's strength. And so do I. And more. When you are touched as I have been, there is no question anymore.
You are most certainly not alone.
23 November 2018
Texas Jim
Actual photo location: Intersection of Trough Road with I-70, Colorado
www.granitecoast.ca
Category:Animals
Subcategory:Birds
Subcategory Detail:
Keywords:Colorado, I-70, Silverthorne, cold, colorful, current, duck, floating, ice, mallard, ripples, river, road, shadow, time, trough, winter
Jim Lindsey