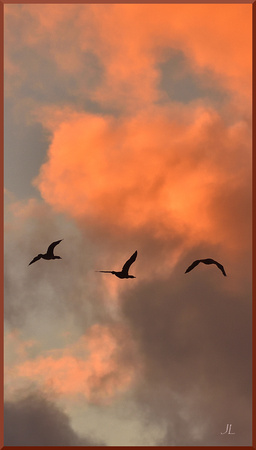 "I miss Jesse Winchester," said Little Mac. He was walking ahead of Big Bertha on the path back to the village from the High Head. The wind was at their backs but he liked even more of a shield. "What brought that to mind, Grasshopper?" said Big Bertha, who had to slow down to keep from stepping on Little Mac's heels, his steps were so much shorter than hers. "Those geese flying south," said Little Mac. "Jesse sang that as soon as the weatherman mentioned snow, he was making his plans to go, and if he was a bird he would fly back south." "Oh," said Big Bertha, "you're back onto wanting us to spend the winter in Florida. Forget it. It will never happen. This is where we live. I'm not going to uproot myself every year because a little snow gets your goat." Little Mac slipped on a smooth sloping rock in the path and fell into the bushes on one side. "Ow, ow, ow," he said. "See what happens? One little flurry and everything gets dangerous." Big Bertha helped him up. As soon as the path widened into Indian Point Road, she slipped her hand into his and walked side by side with him. "It'll be all right," she said. "You know it's always all right." "I know," said Little Mac, squeezing her hand and making a frowning face. "I know. I think I scraped my knee, though. Do we have any bandaids?" "Yes, my love," said Big Bertha. "We have bandaids. I'll put one on for you. One of the Mickey Mouse ones that you like. And we can play that Jesse song on Youtube." She leaned over and gave him a kiss on the cheek. "Thank you," said Little Mac. "You're so sweet to me. I'm such a lucky guy. Even in the winter."