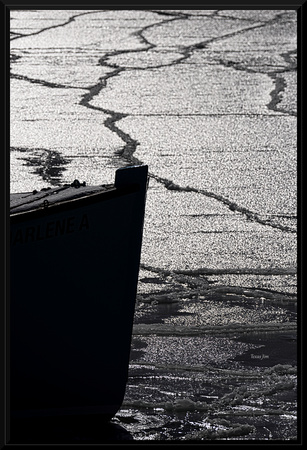 Please Leave Me Out of This Story
Noah had a scrapbook of his granddad's photos open on his lap. He had been turning the pages, but now he had stopped. There was a lone boat trapped in moonlit ice. It had the effect of stripping away his last defenses. As if in a mirror, he saw himself in that dimly lit darkness. He felt himself cold and alone. Stuck. Now the pages were impossibly heavy. Now he could not even lift his arms.
Along with Noah, Minnie, Cloud, Farhead and Nearheart sat around the grand but battered old wooden table that except for the chairs in which they sat was the only furniture in the cavernous living room lit only by the single functioning bulb in the chandelier over the table that hung from the shadowy high ceiling on a chain the links of which were in the shape of reptiles swallowing their tails.
All had glasses. The four adults had wine. No one was drinking anything. No one was talking. They had been telling stories, stories that had become increasingly rambunctious as the glasses were drained and refilled. Then Minnie had gotten the telephone call. Noah's mother had been killed in a drive-by shooting at the entrance to a nightclub in the city, along with the date who had taken her dancing. The same snow into which her life's blood had run out had prevented the ambulance from arriving in time.
What they were doing was all holding hands. All but Noah, who preferred the photos. He had brought them from home when Minnie took him to Cloud's so Delilah could go on her date.
"I don't want to be in this story," said Farhead at last.
"Imagine if you had to be the storyteller," Cloud replied.
"I would end it as soon as I could, if I was," Nearheart said.
Minnie was crying. The look in her eyes said that all of her words had run out. She managed an agonized moan. That made Noah raise his head. He raised it slowly, as if someone were doing their best to hold it down. And then he closed the book of photographs and inserted his own smaller hands in the ring.
3 March 2022
Texas Jim
Hatchetts Cove, Nova Scotia
Category:Artistic
Subcategory:Black & White
Subcategory Detail:
Keywords:and, black, boat, fissured, ice, monochrome, moonlight, prow, silhouette, white
Jim Lindsey