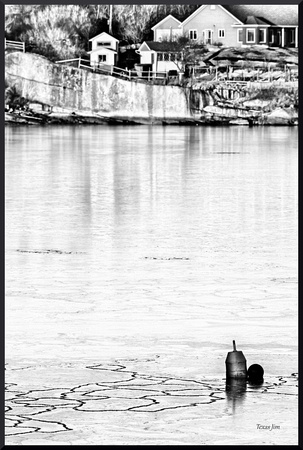 Cracks in the Ice
Delilah had looked for Aunt Minnie all over the house and finally had spied her sitting out on the dock. Delilah knew that her mother Bertha's childhood friend, who had moved from California back to Nova Scotia to live with them after losing her movie actor husband, was no fan of the cold, so she wondered at her sitting out there on a January afternoon when it was so cold that a certain slowness seemed to be called for because quickness might result in some vital appendage shattering and falling off.
She said as much on sitting down beside Minnie in the second of the two chairs that were bolted down there so as not to go sailing away in the high winds the seaside village was so frequently assailed by.
"I don't know," Minnie said listlessly, her eyes glassy with tears. "It might be amusing to lose an arm or a leg that way. Then you could gather up the pieces and use them for ice cubes. It would give a Bloody Mary new meaning."
"I know you miss them, dear Minnie," Delilah ventured after the emotion that caused her own eyes to glisten had subsided. "I miss them every minute of every hour of every day. But ..."
Minnie raised an ungloved hand that was bluish and trembling to ward off the hand that Delilah had extended to comfort her. "Please, Dee, no buts. Not one and not many and not any. I'm at a place where one more drop of sympathy will break the dam, eh?"
They were the chairs that Big Bertha and Little Mac had come out to on so many mornings for coffee together before starting their day. There were still rings on the arms of the chairs where their cups used to rest.
Delilah wanted at least to bring gloves and a hat to her aunt or at least a coat more substantial than the light wool one she wore all unbuttoned. She abstained however. She could feel her aunt's grief and it was true. She was right at the limit.
"I know there is hope," Minnie said. "After all, as it says in the poem, 'the sky flashes and the great sea yearns. We ourselves flash and yearn.' But the fellow who said that jumped off of a bridge. Well, I am not jumping. I see the ice is cracking even now. Spring will return, I know. I just ... I just ... Oh Delilah, sometimes the very breath sticks in my lungs and no amount of hoping helps."
The cracks in the ice, Delilah knew, having lived there all her life, had nothing to do with a thaw. It was simply the change of the tide. Nevertheless, she kept that to herself. Nor did she offer any further solace to her aunt. She did continue sitting, as she had not been asked to leave. She sat, and they sat, as the reflections lengthened on the ice, because their love was so heavy, at once an immovable anchor and an irresistible storm surge, that there was nothing else to do.
25 January 2020
Texas Jim
East Dover, Nova Scotia
www.granitecoast.ca
Category:Scenic
Subcategory:Oceans
Subcategory Detail:
Keywords:Atlantic, Dover, East, Nova, Scotia, and, bay, black, buoy, cliffside, cracks, houses, ice, landscape, monochrome, mooring, north, ocean, reflections, sea, white
Jim Lindsey