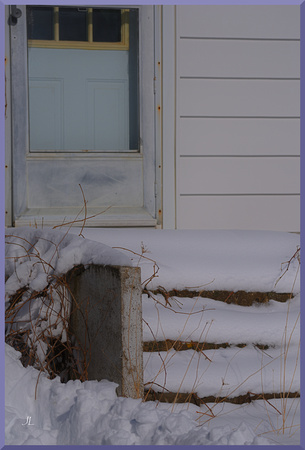 The Home That Was Sweet Home DSC_3396

Look at me. Even better, look at what I see. There's a dresser with its veneer split and peeled from end to end. And a mirror with little flower-like gold thingies where the reflective coating has peeled away. And a window. A window that has lost hold of its blinds so they dangle from one side and can't be raised or lowered. Take a gander. Ask me if I care and if I do then why.

Because it doesn't matter to me anymore that everything is all worn out. That's why. Because at least it's mine. The house, the furniture, this bed I'm in and spend more time in than I should. This quilt my mother called a fidget quilt. That her mom made. That had things sewn on that might help you remember. Like a little plastic wrench and a rubber fish and even a piece of the necktie that he always wore to church. That my dad wore. Who the quilt was made for.

Sometimes I look out past the blinds. Not so much at what the light is falling on as at the light itself. Sure, there's some trees. A garage. The backyard. The hot tub my dad put together but could never get to work. And he kept saying he'd get someone in and in a week we would all be relaxing but then he forgot and again he forgot and again. And then he died and the leaves gathered on the cover and my mother started putting all these chachkas on it like it was some sort of nativity scene. Only Jesus was a glass hippopotamus and the manger was the shriveled paw of a river otter and the three wise men were little plastic mice with dark glasses. And none of us ever got to soak except my mother who would sit on the edge of the cover and drink herself blind.

No, not so much at all of that but how the sunlight hoists it from the shadows for a while and makes it shine. So you can see if there is something there that has the power still to make your face get hot so hot your tears steam up your glasses and the neighbours grab their children when you start to shout.

So, that is what it's all about. But I go out. I do. Just never from the front. I go out through the back and past the hot tub from hell and through the gate in the fence and the woods in the next lot and onto the street. And if anybody calls my name I answer back as if they've made my day.

"Hey there you Donna Robichaux! You're the queen of the in-between, if you know what I mean!"

And then we go for a walk and we smoke some pot maybe and we talk about babies and the sea says that's okay, the sky says you're all right and for a while I think that I am really maybe someone else who went to meet a guy and he was there and we went off together and got married, don't you know?