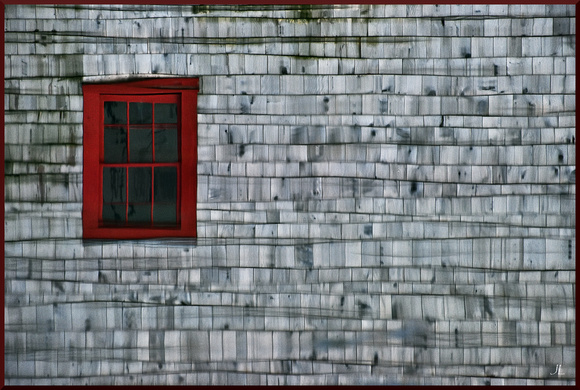 Window in the Water

In the joined wooden chairs on the dock, that were bolted down to keep them from blowing away into the sea, Sir Barksalot and his human Noah sat on a calm spring morning contemplating the undulating high tide in the cove. A forest green shawl, that belonged to Noah's grandmother Big Bertha, lapped them both, keeping off the chill, which abided though all the snow was now melted except for a pocketful under the chairs. Both dog and boy wore thinking caps, that were actually tea cosies, after the manner of Noah's somewhat eccentric grandfather Little Mac, for Noah had brought Sir Barksalot outside to hear a story, and he wasn't quite sure what the story would be, and he knew he would need all the help he could get to make it up convincingly.

Noah's cap was blue and Sir Barksalot's white with little golden fishes embroidered in it all around.

"So you see, dear Sir Barkie," said Noah, "it's all about that window in the water there."

The dog acknowledged with a yip.

"That window is magic. If you can get in through that window, inside is everything your heart desires."

The dog tipped its head to one side.

"No, it's true all right. And here's the story of the boy who made it in. His name was ... his name was Malarkey, and he came from a land far away. The fame of the window had spread after so many tried and so many failed to get in. Some had drowned, and some had just gone crazy trying to figure out how to get in. But Malarkey had a secret. He had a thinking cap he won from the gods in a card game, and he was sure it would give him the answers he needed.

"Now, first off, Malarkey knew he couldn't just row out to the window and jump in. Why, you ask? Because then ... because the boat would drift away, that's why. And then he couldn't get back to the shore with his treasure. So ... he had to find someone to take him. But no one wanted to ... because there was a sea serpent that would devour any boat that came near ... if it had more than one passenger.

"Malarkey thought about this very hard, and his thinking cap told him ... to row out to an island called Saul, that was one of the islands that shielded the harbor. So he did. And then the cap told him to watch the waves break for a while on the big rocks on the outer shore of the island ... and the answer would come to him.

"So he did. But he sat down too close to the breakers and the spray from one wave that was huge swept right over and soaked him. Then he ... then he was very unhappy ... and cold ... but when he opened his eyes, in his lap was a stick ... a magic stick ... that when you tapped it on the water three times and said 'Open says me' would open out into a raft. His thinking cap from the gods told him that. And of course he said, he said, 'But why do I need a raft when I have a boat already?' And the cap said, out loud because it was tired of being quiet all the time, 'Because you cannot get back in your boat. The north wind is too strong. And, and even if you could, the boat would still drift away when you tried to get into the window. But the magic raft will turn the wind around, and when you get to the window, it will stay till you tell it to leave.

"So Malarkey went back to the shore and he saw that the wind was too strong and so 'Open says me' he says and the stick opened out to a raft and he got on it and the wind turned around and blew him back into the cove. And that was nice but the wind also made waves so Malarkey couldn't see the window in the water. So Malarkey says to his god cap, 'Now what?' And the cap says, 'Keep your pants on,' and then the wind goes away and the waves go away and there the window is again. 'But now how do I get in the window without drowning?' says Malarkey. And the cap says 'If your heart's desires are what they ought to be, you will not drown.'

"Malarkey thought of asking the cap what his desires ought to be, but he knew what they were and that nothing could change them and that the cap would tell him just to take his chances so he did. In he went. And, and, there was no splash 'cause his desires were indeed what they had ought to be, and the water parted ahead of him and the window opened to receive him. And inside what do you think was awaiting him, Barkey? Not any treasure of gold and silver, no sir. Nor even emeralds or rubies or diamonds. It was his mama and papa together again, and they was, and they was..."

Noah stopped to wipe his eyes and because his voice had been choked off as if his throat were a hose with a kink in it suddenly. Alarmed, Sir Barksalot climbed over the arms between the two chairs into his human's lap and licked the boy's cheek.

Noah hugged the dog to his chest and buried his face in its fur so his next words were slurred, more clear in his mind than in his speech, 'and they was all three together again, around a table with Thanksgiving dinner piled high, and there was a whole turkey leg for Malarkey and a whole bowl of gravy, and you was there, Barkie ... I mean Malarkey's dog was there and he got a leg and gravy too...

"And then, and then, and then what happened? Why, nothin' else needed to happen, so nothin' else did. Nothin' else did, Barkie. That is the end of the story. Except, except here is the stick I brought back, that Malarkey brought back, that turned back to a stick when the raft wasn't needed no more. And it's for you. I told you I would bring you a present, because you didn't feel so good, and so I did. Here, go fetch!"

Noah flung the stick into the cove and Sir Barksalot launched himself after it over the edge of the dock. Big Bertha's shawl followed, entangled in the dog's claws. With the plunge, the window in the water disappeared and Sir Barksalot's white thinking cap with the golden fishes embroidered in it came off and had to be retrieved by his human along with the shawl.

"So," said Big Bertha, who was rocking in her rocking chair and not sewing because she had caught the same cold that had caught her husband Little Mac, "Did you think about what happened yesterday?"

"And what was the upshot?"

"Well, there was two upshots. One was that you was right and I should never take Granddaddy's boat without asking. And that I was darn lucky someone saw me and called Mr. Christian to stop by the island in his lobsterboat and get me."

"Good. Very good, Noah. And the other upshot?"

"Well, Granddad tells me stories a lot, and so I wanted to tell one to Sir Barksalot, and so I made it all into a fairy tale. And he listened, you know? He really listened."

Big Bertha asked to hear the tale. "Good," she said when it was done. "That's very good, hon. That's ... really fine. Now, before you catch cold like the rest of us, go change out of those wet clothes. And dry Sir Barkie off too. And take a towel to the floor where you've both dripped all over it. I'm not up to much today. Oh, and go tell your mother everything you've told me. She's still in bed and not feeling well either."

"Does it have to be everything? I don't want to make her cry."

"Well," said Big Bertha, who was near tears herself at her grandson's precociousness, "if you like, you can leave out the window."