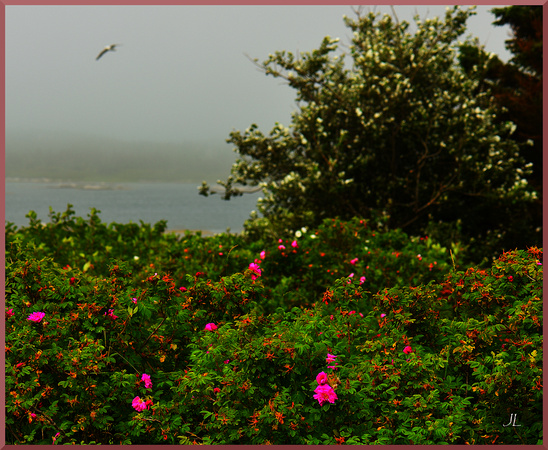 Big Bertha had taken her diary outside and sat down under her sun umbrella and let the cool sea breeze roll in out of the fog and bring the fragrance of their hedge of wild roses to her. The smell went straight to her heart.

"What queen could be richer or have better servants?" she wrote.

Her daughter Delilah had been after her to take up some form of exercise now that she didn't have to sew from dawn to dusk. "You're not a prisoner of that chair any longer," Delilah had said. "And your health would benefit. Your knees would thank you for it if you lost some weight."

Bertha smiled and sipped from her glass of iced peppermint tea. Delilah was right, the dear girl. To have the love and concern of one's daughter was so precious. And she would contemplate that love from her outpost outdoors. It was part and parcel of her incomparable wealth. But she was not about to take up anything. Her long day's work was done. And you could call it exercise but what it was was work and that was done. Even household chores were a thing of the past thanks to Cousin Minnie, who in addition to funding her retirement had also hired a maid.

No, her good fortune was complete. Nor did she need to take up any hobby, as her husband Little Mac had with his camera. She would never be bored. She would never feel useless. Her Adirondack chair, that Little Mac had built and reinforced especially for her, was her throne. All she had to do was sit and rule her world. And as it turned out, her world was incredibly self-ruling. The birds and the bees behaved just as they should. The fog and the flowers knew what was expected. The night never failed to put in its appearance nor the morning to make everything new.

Having written the one line in her diary, she judged that too to be enough. The little leatherbound book lay in her lap, not even shut. There was no further need to be private. The sun and what she said need not, she thought, be strangers any longer.

Time was not well understood, she also thought. It was fine like it was. There was no need for it to be lengthened or filled up or fought over. It was only a story. Using it wisely was simply a matter of letting it be.

The breeze was quicker higher up. It tossed the leaves of a tree behind the hedge so their pale backsides showed like the slip of her dress might have done when she was a girl. A seagull in the distance over the back bay caught an updraft and soared heavenward. The gentle light of the fog was a kindness to her tired eyes.

"What queen?" she whispered, and lay back and closed her eyes and passed away.